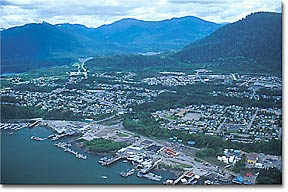 As an official from CSIS outlined in Ottawa yesterday, the world is not a very safe place these days, some countries wish us ill in these tense times and if necessary, it seems that our government will do whatever it takes to keep us safe.

Parliamentary committee members heard testimony this week from CSIS officials that if lives are at stake, Canadian spies will act on information obtained abroad with the use of torture.

Rights advocates were understandably nervous about the sudden conversion to the Jack Bauer School of information gathering, something that could see Canada having to set up a similar type of integration centre along the lines of a Guantanamo Bay.

If it comes to that, one wonders if perhaps the process has not already begun on the North Coast to set up a Camp Rupert, Canada’s own little window on the world of information gathering by any means.

Lately there has been an awful lot of fencing and barbed wire going up around the old Malkin’s Warehouse location on George Hills Way, home it seems to a large number of black automobiles.

From that bit of mysterious fence building, it isn’t hard to think that the North coast may make a perfect place for a detention camp, compared to other parts of Canada the land is relatively cheap and if you think about it, there are many possibilities in the area for just such a site. From the old Miller Bay hospital site, over to Sourdough Bay with its gun embankments still standing guard. Maybe the Ridley Island log sort could be used or then again everyone’s favourite spot for industry the rusting pulp mill at Watson Island, all the locations for the most part are isolated and could more than serve such a purpose.

Ordinarily we wouldn’t pay much heed to these kinds of rumours making the rounds, but it wasn’t too long ago that the Canadian Navy was talking about expanding its fleet to serve the North coast; Guantanamo Bay after all is first and foremost a naval base so perhaps there is something in the works after all.

Outsiders may object, but in an area that is suffering from the economic malaise these days, a large number of government jobs and the ability for local businesses to provide goods and services for such an operation may be too hard to resist.

Large numbers of construction jobs would be created in the early going to construct such a centre and the day to day operation of it could prove to be a secure form of employment for many local services.

Sure thing this camp idea certainly isn’t, but like any good kind of spy novel, there are always clues to look for on this story, if you take the time to seek them out.
Posted by . at 12:14 am