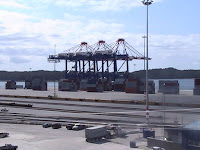 “We are almost literally living on a week to week basis to see what the world economy will throw at us next.”-- Don Krusel, CEO and President of the Prince Rupert Port Authority outlining the challenges of transportation in these economic times.
Two weeks ago we provided some background on the state of shipping on British Columbia's south coast, as the Vancouver Port Authority provided figures showing a decline in shipments of up to 25 percent through Port Metro Vancouver in the first two months of 2009.
A situation that so far has resulted in some 89,000 less units transiting through the various ports of Vancouver's waterfront, a keen indication as to the impact of the world's current economic slowdown and how it has begun to affect British Columbia's transportation network.
At that time, the Vancouver Sun did not have any numbers on throughput at Fairview Port in Prince Rupert, details that were revealed on Tuesday at a Prince Rupert Chamber of Commerce function.
Mr. Krusel revealed that overall output of all of the terminals of Prince Rupert's waterfront are expected be down slightly from last years numbers, as the Port expects tonnage to average in at around 9 million tonnes by the end of 2009, down from 10.6 million tonnes in 2008.
While overall tonnage may be anticipated to decline, the actual throughput at the Fairview Container Terminal is expected to rise slightly, with the Port's CEO expecting to see 2/2 million tonnes pass through the terminal this year, up from last years 1.8 million.
Those numbers however could change quickly if the economy should not recover as fast as anticipated, and like much of the continents ports, the Rupert operation is at the mercy of global economic forces.
That uncertain financial state could also have an impact on the proposed phase two development. While the port was stressing that all is on schedule for the early development phase, with project planning at 85 per cent complete and all of the geotechnical requirements now complete, they also are realistic enough to realize that the economic crunch could have an impact on the timetable of development for the much anticipated second phase.
The construction phase of the development is scheduled to begin in 2010, but should funding opportunities become captive to the economic stagnation of late, there could be a change required to that timetable of development.
Northern View-- Prince Rupert Port Authority outlines 2009 projections
Posted by . at 12:40 am