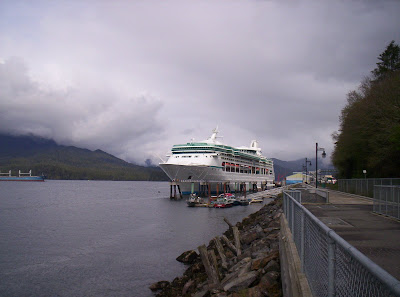 The first of twenty four port visits takes place in just one months time, as Prince Rupert's 2009 cruise ship season gets underway with a visit from the Norwegian Star.
With the Norwegian Star making 17 of those 24 port visits, this is probably as close as Prince Rupert is going to get to home port status for a while.
Among the other ships set to call on Prince Rupert's Northland Terminal in 2009 are the Serenade of the Seas which makes its only port call on May 13. The Silver Shadow on June 23rd and the vessel The World, which arrives on the same day as a Norwegian Star call and thus will use tender boats to ferry passengers back and forth.
The Spirit of Oceanus will call on Prince Rupert three times with its first arrival planned for May 30th at the Atlin Terminal , the Clipper Odyssey will also call on Atlin on August 11th for its only port call of the year in Prince Rupert.
The 2009 season will prove to be a challenging one for local businesses and operators, (as outlined here and here) with less vessels making Prince Rupert a stop on the Alaska cruise schedule map, there will be less visitors to the city this summer, with 41,743 passengers arriving as potential tourists.
It's a reduction in foot traffic that Prince Rupert shares with other BC ports this summer, as the various cruise lines readjust their schedules and port visits to reflect changing attitudes and economic concerns.
The Port of Prince Rupert released its preliminary schedule for 2009 back in January and there have not been many additions made since that release.
Posted by . at 8:47 pm