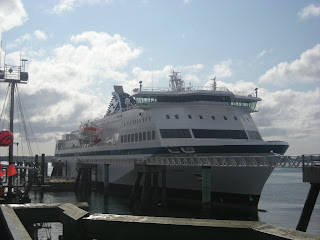 While there are some concerns that recent tax increases in Alaska may result in a reduction of cruise traffic along the coast this season, a recent bit of recognition for both BC Ferry Service and the Alaska Marine Highway System could help bring more traffic to Alaska through Prince Rupert.
BC Ferries was recognized as the number five ferry attraction in the world by the Society of American Travel Writers, joining the ranks of the Hong Kong ferry, the Staten Island Ferry and the Ferries of the San Francisco Bay area.
The Travel writers organization found the BC Ferry system to be a "world apart" and gushed about the scenery and conveniences found on the ferries that carry the BC Ferry colours.
Likewise the Alaska Marine Highway System got high marks, clocking in at number eight on the list, as the travel writers found the service from the Last frontier to be a bargain with its many stops ready for exploration.
Considering Prince Rupert's convenient location for the boarding of either of these top ten services, you would have to think that Prince Rupert is bound to benefit from increased visits, if either gets a significant bump in ridership thanks to the top ten recognition.
Posted by . at 10:53 pm