If the environmental issues are resolved, more north east coal could be heading for Ridley Terminals 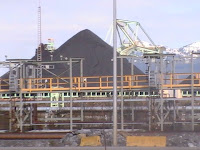 An agreement between a Northeast First Nation and a Vancouver based coal company could see an increase in shipments through Prince Rupert's Ridley Terminals by early 2010.
The McLeod Lake Indian band, and First Coal Corporation of Vancouver, both signed off on a memorandum of Understanding agreement that will see the coal company conduct exploration on the traditional territory of the McLeod Lake band, First Coal describes their extraction process as an environmentally friendly one, though the plan will still require the usual environmental assessments before any actual work commences.
That's not a slam dunk considering that First Coal has run afoul of the Dogwood Initiative in past exploration projects, where concerns about their environmental awareness had been outlined and the detractors appear to be well organized.
The company is also consulting with three other local First Nations about the exploration deal, all on lands which are adjacent to rail lines which travel through to Prince Rupert's Ridley Island.
Should First Coal be able to resolve the outstanding issues regarding their proposed development, it's anticipated that the mine could be in operation by August.
CBC News-- Coal firm reaches deal with B.C. First Nation
Energeticcity-- First Coal signs MOU with McLeod Lake Indian Band
Posted by . at 10:10 pm

Labels: Coal development in Northeastern BC