A Queen prepares to take her leave 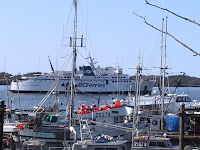 Monday, April 20 will mark the last day of service for the Queen of Prince Rupert, the long time workhorse of the Northern BC Ferry fleet will be decommissioned at the Fairview Bay Terminal on that day, bringing to an end a colourful history on the North Coast.
43 years of transit up and down the Northern coast and over to the Queen Charlotte Islands has marked the Queen of Prince Rupert's travel logs, one of the key transportation links for many Northern BC residents and tourists to this part of the province.
The decommissioning ceremony will take place at 9 am on Monday morning, with BC Ferries inviting current and former employees, as well as local citizens to take part in the farewell.
There will be one final morning of tours of the vessel, with the actual decomissioning portion of the celebration to take place at 10 am, the final ringing of the ferry's bell will signify a passing of maritime history on the North Coast.
The Northern Adventure takes up its duties again on April 19th, covering both the Queen Charlotte and Port Hardy runs until May when the Nothern Expedition will also join the northern fleet in active service.
CFTK News-- Ferry Farewell on Monday
The Northern View-- Queen of Prince Rupert to be decommissioned on Monday
BC Ferries website-- QUEEN OF PRINCE RUPERT DECOMMISSIONING CEREMONY
.
BC Ferries website-- Queen of Prince Rupert
Westcoast Ferries website-- Queen of Prince Rupert
Posted by . at 12:15 am

Labels: Queen of Prince Rupert set to end its time on the North Coast