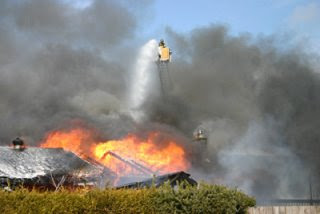 Four fire fighters in Kitimat were sent to hospital and an extra crew was called in from Terrace for support, after a stubborn blaze in Partridge street duplex kept fire officials busy for the bulk of the afternoon on Tuesday.
Kitimat fire service personnel responded to the fire at 2:20 in the afternoon, it took them about an hour to knock down the fire. No residents were injured in the incident, but in the process of fighting the fire, some suffered smoke inhalation and were sent to hospital for observation, all but one were released that evening with the remaining firefighter kept in over night for further examination.
The cause of the fire has yet to be determined and the investigation is still under way, though officials fear that the intensity of the blaze and structural damage to the building may not provide much in the way of information as to the cause.
Northern Sentinel-- Kitimat home gutted by fire
Posted by . at 11:03 pm