Sure Herb and Gary can have the Daily News, but Lisa, Lisa has the Vancouver Sun... 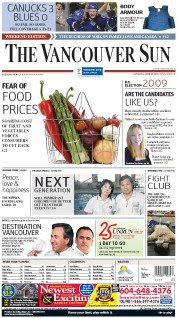 The Green Party's candidate on the North Coast Lisa Girbav is getting more exposure in one Saturday, than perhaps both Gary Coons and Herb Pond will find in this entire campaign.

Right there on the front page of The weekend edition of the Vancouver Sun, is the picture of Prince Rupert's Miss Girbav, the photo placed above the fold as they say, providing an instant recognition factor for Rupertites picking up their weekend paper and a pretty good introduction for the rest of the province.
Now to be honest, the accompanying article does not explore her thoughts on the issues, nor does it highlight any of the campaign details of local interest. It is instead, with a one line mention of the North coast candidate, part of a larger feature on page A13 of the weekend paper that explores the concept of how much the candidates most resemble the voters they are trying to impress.
Miss Girbav's age is the key point of her inclusion in the article, which examines how the demographics of the campaign are diverse and reflective of the province. Our local green candidate at 19 showcasing the youngest age of the spectrum of candidates, while the Liberal candidate in Vancouver-Capliano Ralph Sultan at 75 highlights the oldest.
.
Still for a young candidate just beginning a political career, making the front page of the Vancouver Sun is a pretty impressive debut. Better yet, it was her second mention on that papers website in less than twenty four hours.
.
Considering that the Green Party isn't quite in the same financial league as the Liberals and the NDP when it comes to gaining attention from the media, the inclusion of their youngest candidate on the front page of the province's largest newspaper can only provide much in the way in interest in their message and in their campaign.
.
And in politics, finding a way to become relevant and of interest to the voters is what it's all about.
Posted by . at 1:50 pm

Labels: Lisa Girbav on the front page of the Vancouver Sun