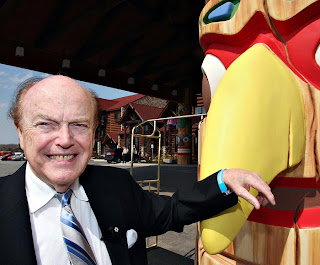 "We would like to thank Save-On-Foods for their support, we are now able to better service the passionate fans in Vancouver and across the country."-- CBC Sports executive Scott Moore praising Jimmy Pattison, the CBC's Daddy Warbucks when it comes to hockey coverage.
It's indicative of the rather drastic times that the nations public broadcaster are facing, the CBC will only be able to show the Vancouver Canucks playoff games in St. Louis in High Definition with the assistance of the wallet of one of BC's most wealthiest businessmen.
Jimmy Pattison has forwarded a rumoured 100,000 dollars to the CBC to enable it to rent a High Definition truck in St. Louis, when the NHL playoff series moves on to Missouri on Sunday.
The CBC it seems has two High Definition trucks of their own, one covering the Bruins and Canadiens series as well as the Penguins and Flyers. While the other was on the west coast with the Canucks and Blues, that one apparently wouldn't make it to St. Louis in time to set up for the Sunday broadcast, so the original plan was to broadcast the Sunday and Tuesday game in just run of the mill broadcast quality television.
News of that development apparently hasn't been sitting well with Canuck fans, who smelled Central Canadian conspiracy in the wind, quickly pointing out that fans of Les Habitants haven't had to deal with the scourge of regular TV for their games. But now with the CBC starting to look more and more frequently like one of those charity telethons seeking out funds to keep the doors open, they seem to have hit that HD jackpot to keep the cameras rolling.
With the CBC working out the details on the latest staff cutbacks and budget troubles, spending the money to rent their own truck in St. Louis seemed to be something that they couldn't do in good conscience.
While the Pattison donation sees the big picture and secures an HD signal for hockey fans, it more than likely signals something completely different for those that might be worried about the state of the nations public broadcaster.
Posted by . at 1:21 am