One era ends... and another prepares to begin.. 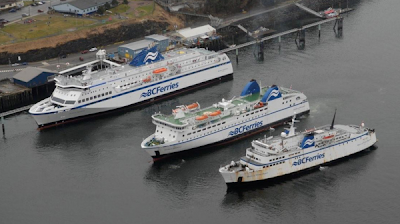 BC Ferries paid their respects to a faithful servant of the coastal waters of the province on Monday morning, as the Ferry Corporation held a decommissioning ceremony at the Fairview Bay Ferry Terminal.
As a bell sounded out, the Queen of Prince Rupert was officially retired on Monday, bringing to an end 43 years of service to the North Coast and Queen Charlotte Islands.
Over 200 Rupertites were in attendance to take one last tour of the vessel and stand by as the vessel was celebrated for her service.
The Northern View provided a report posted on line this morning featuring the tone and atmosphere of the decommissioning ceremony.
As Prince Rupert was bidding farewell to the long time fixture on the waterfront, BC Ferries was releasing a fascinating picture that showcases the past and future of the Ferry service on the North coast.
Posted on their website, (and shown above) the photo features the Queen of Prince Rupert, The Northern Adventure and the newest vessel on the North coast, The Northern Expedition, the latter having spent the weekend tied up alongside the Northland Cruise Terminal, a postcard picture taking opportunity for locals, who will no doubt be taking that tour of the new vessel in May.
BC Ferries is clearly quite excited about the debut of service for the Northern Expedition, their website features a number of tourist oriented packages designed to try and bring large numbers of visitors to the North Coast.
It's been a number of years of planning for the introduction of the new service, one which will hopefully bring the North coast to the destination status that it has been seeking for a while now. Ever since the sinking of the Queen of the North, local tourism operators and community members have been waiting for BC Ferries to provide a replacement vessel to try and bring back the volume of visitors that once passed through the city.
.
At times the time frame of delivery caused concern over the potential of losing business for a good number of years, but now that the delays and wait times are over and with the vessel on display inside the harbour, expectations are probably going to be high for a good tourist year, from the ferry service anyways.
With the Northern Expedition soon to take up it's place in the northern fleet, many are hopeful that the tourism sector will begin to recapture some of those lost visits of the last few years and build upon the tradition that the Queen of Prince Rupert upheld for those 43 years.
Posted by . at 9:58 pm