Northern Expedition slips alongside for a short stay 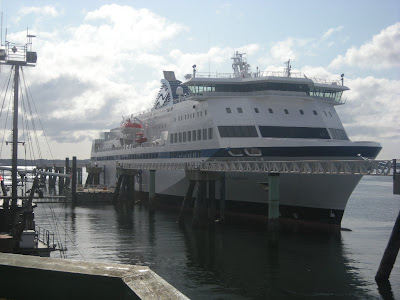 Rupertites spent the weekend wandering the walkways of the Atlin and Northland Cruise Ship Terminal areas taking a look at the newest vessel in the BC Ferry Fleet.

The Northern Expedition was tied up at the Northland Cruise Ship Terminal over the weekend, having spent the last week or so running training sessions for BC Ferry staff in the waters around the city and while not locals were allowed on board for look over, more than a few took advantage of the downtown location to get an up close look at the vessel.

The official open house comes up on May 2nd when BC Ferries will show off the German built ferry which offers space for 600 passengers, 55 staterooms and room for for 130 vehicles. Rupertites can look over the new features from 1 to 4 pm, Skidegate residents and others on the Charlottes will get their chance one day later from 2 to 5pm.

A first glance at the new ferry seems to suggest more of a cruise ship look as opposed to the traditional outline of the ferry as we have come to know it on the North coast.

The Northern Expedition will take over from the Queen of Prince Rupert in mid May, The QPR will receive it's official farewell on Monday, as BC Ferries decommissions the vessel with a ceremony starting at 9 am, Rupert residents can take one final tour of the ship between 9 and 11 am.
Posted by . at 10:59 pm