Two and out for Canada 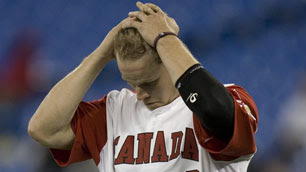 On Saturday they provided the fans at Toronto's Rogers Centre with a taste of what last gasp baseball was all about, on Monday they took their last gasp.
Team Canada has struck out at the World Baseball Classic, after a shocking 6-2 defeat at the bats and gloves and stellar pitching of the Italian squad, a group for the most part made up of mainly semi pro players who seek out regular jobs in Italy, in order to live their version of the baseball dream on the weekends.
Canada which on Saturday battled back with that usual never say die attitude, only to lose a heart breaker against a rather deep American line up, never seemed to be able to muster up that same emotion for its must win game against the Italians.
While pitching has proven to be the Achilles heel of the team from the time it was announced, the simple fact of Monday's loss was that Team Canada could not move men across the plate, especially when the bases were loaded or men were at second and third, far too often the inning would end with nary a base runner advancing that final 90 feet to score a run.
Canada's line up perhaps had as many name players as any other squad outside of the USA team, from Justin Morneau, Jason Bay, Matt Stairs, Russel Martin and Joey Votto, the middle of the line up should have been a regular murderer's row.
.
Instead with the exception of a few brief flashes of major league stylings, the Canadians just couldn't advance the runs when they needed them, a must have for a team that went into the classic with what amounted to the middle of the pack of Triple A pitchers and a collecton of those playing overseas hoping that a little success here would result in one more shot at the big show. (As things have turned out, they'll be heading back overseas probably thankful that at least they still get paid).
Canada ran into trouble on the mound long before the tournament began as injuries to Rich Harden, Jeff Francis and Erik Bedard, took away a lot of the star potential of a starting rotation, those absences along with Ryan Dempster's decision to stay in the camp of the Chicago Cubs, left Canadian manager Ernie Whitt with little choice but to roll the dice with mostly untested minor leaguers and hope like hell that the offence would score enough runs to carry the day.
They came close on Saturday, but they were as far out of the park as they could be on Monday, as Italy which was full value for its win, provided the bulk of the offence that counts, that of runs on the scoreboard. Italia scored enough runs to claim the victory and showed some steely defensive play as they secured the chance to move on into a showdown game with Venezuela, which wil send one of them on to further glory in this tournament.
With two losses in their first two games Canada is eliminated, denying the nation of its much hoped for rematch with the Americans further along in the tournament, or the chance to stand in the final rounds with the likes of perennial powerhouse teams from Japan and Latin America.
For Team Canada Tuesday will be get away day (and we imagine that is just what they want to do) as the players will now disperse for their respective major league camps, and baseball will return to just a national curiosity as it flows through the pre season run up to opening day in April.
Saturday, Canadians were hopeful of a giant step in the nation's baseball evolution with the opportunity to move on in the tournament and show Americans that there's some fine baseball talent north of that border.
Now instead of a collective showcase, we'll have to settle for the individual statistics through the season, hoping that when they recount that success across American this summer, that maybe, just maybe, they could mention the hometowns far to the north. Places where baseball is played with a passion still, but as we found out on Monday isn't always played very well.
Globe and Mail-- A Classic upset
Globe and Mail-- Arrivederci, Canada
National Post-- Italians send Canada crashing out of Classic
National Post-- Urgency absent in loss to Italy
London Free Press-- Mamma mia! Canada out
New York Times-- Italy Upsets Canada at World Baseball Classic
CBC Sports-- Italy eliminates Canada from Baseball Classic
.
Logo above from the WBC Website, Photo right from the CBC website
Posted by . at 12:49 am