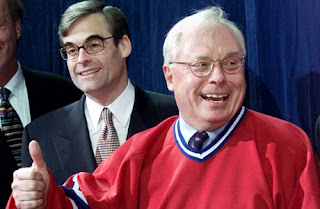 The whispers turned into a roar this week as news finally was confirmed that George Gillett, owner of the Montreal Canadiens was seeking out a valuation of his franchise, perhaps in a bid to secure some liquidity for his many other business ventures.
.
Gillett like many other of the monied class is finding that the current economic upheaval is causing no shortage of troubles with his varied interests, from his stake in the English League's Liverpool squad, to his Formula one inclinations and on to any number of car dealerships across America, the bills seem to keep coming due even if the revenues aren't quite as rewarding as they once were.
.
While Canadians may think that the storied Canadiens franchise is the jewel in a financial portfolio crown, in reality considering the vastness of the Gillett holdings, it probably is just another line item on his financial prospectus, a rather treasured one for Canadians, but an asset none the less that could provide some fast cash in troubled times.
.
There hasn't been much said as of yet as to what his inclinations are regarding the Habs, though just the prospect of the team going up on the "For Sale" block has caused no shortage of angst in Quebec, where the hockey team is much more than a sports franchise, steeped as it is in the culture, one part emotional touchstone and one part financial status symbol.
.
Many in Quebec are putting together their own personal short lists as to which company or local notable should be getting ready to contact the lawyers to close the deal. A veritable who's who of Quebec society and financial muscle have been mentioned as potential investors, from the Desmarais family of Power Corporation fame, to Guy Laliberte; the owner of Cirque de Soleil as well as Las Vegas based chanteuse Celine Dion have all been floated as would be owners.
.
Even Jim Balsillie the perennial default guy for NHL franchises has been mentioned, though being a non Quebecois and from the occasionally despised locale of Ontario, one wonders how well he might be received.
.
The Parti Quebecois always quick to find something to fly the nationalist flag over, has called for a Quebecois to repatriate the club from foreign interests, apparently suffering amnesia that the last time the Canadiens were up for sale, it was only Mr. Gillett that offered up sufficient cash to purchase the team at anything close to the asking price, during that last offer for sale many of those now lauded Quebecois chose to sit on their wallets and purses.
.
It will be with great interest to see if they approach the table this time around.
.
In among all the hand wringing over the finances is the realization that this 100th anniversary season is certainly turning out to be a memorable one, but unfortunately for many of the wrong reasons.
.
The hockey team is in a tail spin and very well may miss the playoffs, the coach was fired one month short of the end of the season, and the taint of organized crime for a while seemed to be wafting through the dressing room of Les Glorieux, now comes the news that their white knight of a few years ago may be looking to ride off into the sunset.
.
All of which seems to sure put a damper on the birthday celebrations...
.
Montreal Gazette-- Sale talk adds to Habs' woes
Montreal Gazette-- If Gillett sells, Montrealers will miss him
Globe and Mail-- Gillett denies he's a seller
Globe and Mail-- Gillett is one year too late
Globe and Mail-- GILLETT TURNS TO FINANCIAL ADVISERS
Toronto Star-- Gillett's big garage sale may include Canadiens
National Post-- Players not worried about possible Canadiens’ sale
National Post-- Gillett ponders sale of share in Canadiens
Saskatoon Star Phoenix-- Canadiens haters could unite to ruin franchise
Vancouver Sun-- Potential Habs sale the LAST thing this team needs
.
Photo above from the Vancouver Sun website
.
This item first appeared over at HockeyNation
Posted by . at 11:10 am

Labels: Are the Canadiens on the for sale listings