And now come the excavators 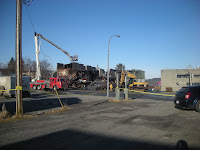 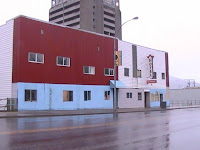 Wednesday night's fire downtown at the Inlander was the talk of the town for Thursday, as Rupertites looked back on the history of the now destined for destruction shell of a building that had been the focus of much of the communities attention for many years.
Through the morning the RCMP continued to block off a part of Second avenue West, diverting traffic around the fire scene allowing for an excavator to begin the process of tearing apart the damaged front portion of the building, providing the opportunity for the Fire Department to continue to put water to potential hot spots through the day.
By nightfall the road had been reopened, the fire trucks had departed and all that remained of Wednesday nights frantic activities was yellow police tape and the ghostly view of the inside of the badly damaged hotel.
The Northern View posted updates online and Daily News provided a story on the front page with the tabloid like headline of "Inferno at the Inlander", complete with numerous photos through the paper, there was detail on the fire scene on page one, with the confirmation that arson was considered a strong candidate as to the cause of Wednesday's conflagration.
Copies of the Thursday Daily News became hard to find as the night went on, as Rupertites grabbed up their personal archive of the final days of the controversial hotel.
Of course, the limitations of a Daily newspaper were also highlighted by the major news event of the day, for most of Wednesday night, local residents had been busy posting their photos on the local message board hackingthemainframe, while others submitted their video efforts to the You Tube portal, a process of instant news gathering that made those locations the go to destinations for on the scene reports of the major fire downtown.
Our original post to this portal from Wednesday night shortly after the fire broke out, contains links to those contributions from local residents, they continue to be updated hour by hour. You can check them out by clicking on this link to the original post and then clicking on the various links to the coverage of the fire
Posted by . at 12:11 am