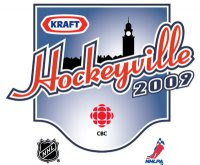 The votes have been tabulated and the results revealed to an anxious public, and the winner of Kraft Hockeyville 2009 is ...................... Terrace, BC.
The northwest BC community was named Hockeyville on Saturday night as the announcement was made live during the first intermission of the Vancouver Canucks/San Jose Sharks game on CBC's Hockey Night in Canada.
The CBC had the commissioner of the NHL, Gary Bettman make the grand announcement, which sent the crowd gathered at the Skeena Mall in Terrace into joy.


As the CBC went to Terrace, the celebration was raucous and the reaction one of being overwhelmed as Terrace residents celebrated the good news.
Reaction was quick to pour in as the Premier relayed his best wishes, touching on the theme of community involvement as the key to the successful Terrace bid, a senes of community that was outlined by the many You Tube videos that appeared as the bid process went along.

Terrace managed to unite the normally competitive communities of the Northwest to fall in behind their bid, with many residents from Prince Rupert through to Smithers and Kitimat spending the last few days contacting the Hockeyville website with their vote.
Judging by the voting tallies they were not alone, the final vote count had Terrace edging out Humbolt Saskatchewan by just over 110,000 votes. By the time all the texting, on line and phone balloting had come to an end, Terrace had received 1,923,456 votes.
Overall some 7100 communities began the quest to be named Hockeyville, eight times more than last year's contest provided, but the last one left standing at the end of the competition was Terrace.
The community will receive 100.000 dollars for arena upgrades, a featured spot in a one hour Kraft Hockeyville special and will host the Vancouver Canucks and New York Islanders on September 14th.
Terrace joins the ranks of Roberval,Quebec, North Bay, Ontario and Salmon River, Nova Scotia as selected cities in the Kraft Hockeyville competitions through the years of the competition.
The Terrace victory spilled out into the streets of the city following the announcement as excited residents honked their horns and celebrated with an ongoing parade and carnival like atmosphere throughout the downtown area.
Kraft Hockeyville webpage
CBC Sports-- Terrace, B.C., is Kraft Hockeyville
Opinion 250-- Terrace is Hockeyville
Terrace Daily online-- TERRACE "IS" HOCKEYVILLE 2009!!!
Vancouver Province-- Terrace is Kraft Hockeyville
BC Local News-- Terrace wins Hockeyville 2009
NHL.com-- Terrace, BC wins Kraft Hockeyville 2009 title
Posted by . at 11:02 pm