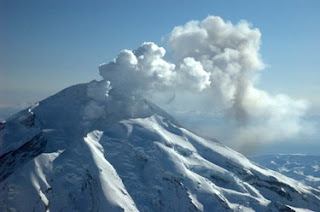 Alaska's Redoubt Volcano provided a few hours of excitement for Anchorage and the Alaska panhandle in the early hours of Monday morning, as five eruptions shot volcanic ash high into the Alaskan sky.
The Alaska Volcano Observatory reported the first eruption at 10:38 pm Alaska Time on Sunday, with the most violent of eruptions coming at 4:31 am Alaska Time, volcanic ash has been projected as high as 60,000 feet above sea level, prevailing winds to the Northeast have kept the ash from landing in Anchorage directly, though there are some reports of ash falling in smaller Alaskan communities to the north.
The main airport at Anchorage, Ted Stevens has not had any ash fall in its immediate area, though Alaska Airlines has cancelled 19 flights thus far out of the airport as a precaution. Elmendorf Air Force Base in Anchorage has also take their own precautions amidst the eruptions, having asked only essential personnel to report for work and putting the vast array of military aircraft at the airport into shelters.
With the flow of the winds there is little chance at this time of the path of ash flow bringing it over British Columbia, though it is expected that the volcano will continue to erupt over the next few months which may see some fall out in this province. Should the wind change direction there is the potential for airport closures in Northern BC, including Prince Rupert if the fallout should increase and flow to the south and east.
The Alaska Volcano Observatory is keeping a close watch on the latest developments and provides a large volume of information about Redoubt on its web page.
The Anchorage Daily News provides for a number of interesting photos of the latest eruption of one of Alaska's most famous volcanoes.
.
Photo above from the Alaska Daily News website..
Posted by . at 7:55 am