Safety first, or into service first? 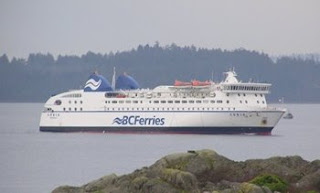 "What exactly did B.C. Ferries learn from the Queen of the North's sinking?" -- Captain David Badior, from a report outlining his concerns over the BC Ferries replacement for the Queen of the North, the vessel Northern Adventure.
Once again the Tyee on line journal has provided some fascinating investigative journalism into the happenings over at BC Ferries, as Andrew MacLeod provides a recitation of events that might make senior management there just a little uncomfortable.
The latest examination of the inner workings of the Ferry Corporation, provides some questions as to whether BC Ferries rushed into service the vessel Northern Adventure, against even the wishes of its own employees.
Captain David Badior, then a senior BC Ferries worker and now a member of management at BC Ferries, outlined his many concerns over the entire launching of the Northern Adventure into service on North coast routes back in 2007.
The vessel once known as the Sonia was purchased by BC Ferries in 2006 and put into service on the North Coast in March of 2007, after one month in service and after numerous reports of problems with the vessel, the Ferry Corporation pulled the Northern Adventure from service for a ten day refit in Vancouver, she returned to service ten days later.
It was during a mid April sailing that Captain Badior became concerned about the introduction of the Northern Adventure into service on the north coast. Captain Badior was part of a "high level" Management/Union team that sailed on the vessel on April 18th, there to examine the state of the vessel and any issues that might have cropped up from it's early sailings.
In the Tyee article he is quoted as being "stunned" that Transport Canada had even certified the vessel and goes on to express disappointment with the Ferry Corporations own Vessel Acquisition Team, which he suggests provided for a total lack of preparation in receiving the ship. He also questions the workings of the Operations Department, which he also suggests should never have accepted the vessel in the shape it was in when it arrived in Canada.
When he isn't outlining the failings of management at BC Ferries, he casts an eye at the political pressure of the day, outlining his impressions of that time period where as he puts it "... the mayor of Prince Rupert, Herb Pond, was already squawking about taking the ship off the run and how bad it would be."
The Tyee investigation also examines the political climate of that period, outlining the safety concerns outlined by MLA Gary Coons at the time, for which Coons was dressed down by BC Ferries CEO David Hahn, a recurring theme it seems in recent years whenever those two gentleman express opinions.
MacLeod also repeats the tone of a letter to the editor of the Prince Rupert Daily News by Steve Smith, who took Coons to task for his press release of the day. MacLeod recounts how in the letter to the paper Mr. Smith reacts with disgust at the press release and praises the vessel as "... a first-class ship with amenities that are unsurpassed by anything we have had before to serve our northern marine highways." Mr. Smith went on from being a writer of letters, to having recently been named to the Board of BC Ferries.
Captain Badior suggests that after a reflection of events of that period of time, that overall Mr. Coons seems to have been correct in his assessment of the situation of the newly introduced Northern Adventure.
The unanswered question of course, is whether the demand on the local scene for a quick replacement for the ill fated Queen of the North was of more importance than a proper examination of the capabilities and safety issues of the replacement provided.
In an interesting bit of timing, Mr. Hahn will be making one of his frequent appearances on the Bill Good show on CKNW on Thursday morning, sometime between 830 am and the noon hour, perhaps the Tyee article not to mention the culture of secrecy at BC Ferries might come up for discussion. If it's helpful, perhaps Captain Badior's original comment back from 2007 about lessons learned from the Queen of the North sinking might make for an interesting conversation starter.
You can read the full Tyee article by Andrew MacLeod from this link.
.
Update: BC Ferries President and CEO David Hahn appeared on the Bill Good show from 9-10 am on Thursday, you can access that interview from the CKNW AUDIO VAULT.
Posted by . at 11:45 pm