Sailing through the fog of information at BC Ferries 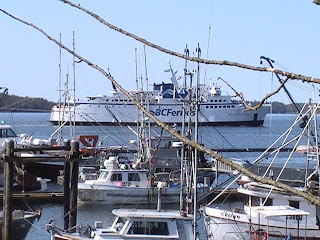 "He gathers together his 'Kool-Aid' drinkers to push the privatization and sell off our marine highway," -- North Coast MLA Gary Coons, quoted in the Tyee over the Liberal Government's privatization agenda for BC Ferries.

More documents once considered classified have made it into the public purview, as the Tyee reveals what it calls the "secret strategy" used by BC Ferries to sell it's new restructured corporation to the British Columbia public.

The article posted to the online journal, outlines documents that go back to November of 2002, and provides the details and opinion, as to how the Liberal Provincial government would use trusted reporters and friends of the Liberal party in a bid to help get the message out as far as the change over from public to private corporation would proceed.

The process of evolution for the corporation was to be one of the province still owning the ferry service, but modelling it on a private agenda along the lines of the province's airport authorities, with the anticipation that a number of coastal routes would eventually be contracted out.

It's a process that has not fully developed some seven years after the original drafts, seven years that have seen the Ferry Corporation frequently become the home of controversy and still somewhat adrift as far as their privatization direction goes.

Opposition critic Gary Coons, the MLA who represents the North Coast has long been trying to make the ongoing privatization decisions relating to the ferry corporation more accountable to the Legislature. It has been an opposition agenda that has been met with more than a bit of resistance from the Provincial government, which frequently paints the North Coast MLA as a complainer or someone not aware of all the facts on issues concerning the Ferry Corporation, the latter a theme which has also found some resonance with David Hahn the current President and CEO of BC Ferries.

Of interest to local residents will be the review by the Tyee of the process to "sell the government's agenda", one which courted editorial support from such newspapers as the Province, The Sun, The Nanaimo Daily News and the Prince Rupert Daily News.

The article goes on to examine how the Ferry cultivated its relationships with those "trusted reporters" and local politicians in various communities served by BC Ferries. It also reviews how the Ferry Corporation expanded the public relations project to people likely to be supportive to the cause, including some well known names on the North coast.

The Tyee provides some interesting thoughts as to how the major media outlets in British Columbia have handled the ferry file thus far, far too often it seems willing to take the press releases at their word and not following up on the details or questioning those developments at any length.

More importantly it offers up a synopsis of what seems to have been a flawed roll out of a new direction for the Ferry corporation, one which has seemingly bypassed the expected route of government, that of the Legislature, for what is apparently a more easily directed public relations exercise through helpful reporters and supporters.

It provides a portrait of a government agenda, steeped as it is in secrecy and confidential projects that leads one to believe that it is a process that may not stand on its own merit.

One that that perhaps needs a more thorough open and accountable public review.
Posted by . at 11:24 pm