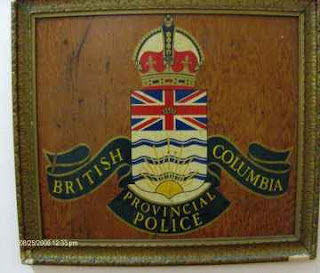 “Ottawa is Rome and we are Constantinople”-- Retired Justice, Wallace Craig making his case for a Provincial Police Force on the Opinion 250 website.
The debate over policing in British Columbia is once again on the front burner, as British Columbians begin to examine the state of policing in the province, that in the wake of the high profile gang wars currently erupting in the Greater Vancouver area and with the increasing number of controversial incidents involving the province's current policing agency the RCMP.

Former Justice Wallace Craig was on the Meisner radio program in Prince George today, outlining how in his thoughts the current situation of contract policing is not working out to British Columbia's benefit, with the province's own Solicitor General has no input over what is going on, owing to the federal nature of the police force.
His thoughts were expanded on with an article posted to the Opinion 250 website, which also hosts a simulcast of the Meisner program every weekday.
His solution would be for a British Columbia Provincial Police Force, a process that was once the law agency in the province, but a force that was turned over to the RCMP back in 1950.
The retired Justice believes that a provincial force would be more accountable to the province, and less likely to as he puts it "close ranks" whenever controversy arises.
With the province currently in early stages of negotiations for a contract renewal for 2012, many are suggesting that the government give serious consideration to returning to the Provincial Police blue print, realizing that if they sign on the dotted line in 2012 the window of opportunity to change the policing culture in the province will be lost for a number of years.
Vancouver Province-- B.C. regional police force touted
Victoria Times Colonist-- B.C. solicitor general open to the notion of provincial police
Posted by . at 10:54 pm