Our ship has almost come in... 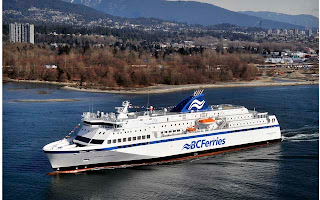 The newest addition to the BC Ferries fleet has arrived in British Columbia waters, as the Northern Expedition pulled into its berth at Nanaimo's Departure Bay terminal over the weekend.
The vessel arrived in Nanaimo after a 9,900 nautical mile trip which took the ferry to British Columbia via the Panama Canal.
The vessel is the fourth of the fleet that was built by FSG Shipyards in Germany. The Northern Expedition will spend the next three weeks going through some final testing and evaluation, before being formally handed over to BC Ferries.
At that time, the vessel will be setting sail for the North coast, offering a little over a month of crew training and familiarization sessions for those that will serve aboard the ship on the Northern coastal routes that the vessel will serve.
The ferry is the long anticipated replacement vessel for the ill fated Queen of the North which sank off of Gil Island almost three years ago.
The Northern Expedition will begin its service to the travelling public in May, a much required addition to the Ferry corporation fleet and one that many local residents have been waiting quite a long time to finally see pulling into Prince Rupert harbour.
Vancouver Sun-- New B.C. ferry arrives in B.C.
Nanaimo Daily News-- New ferry passed by city near end of its voyage from Germany
QCI Observer-- New ferry arrives in BC
.
photo above from the Vancouver Sun Website
Posted by . at 11:41 pm

Labels: Northern Expedition arrives in BC