She just doesn't seem that into you Larry ! 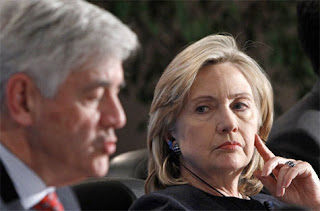 If departing glances could kill, then Foregin Minister Lawrence Cannon probably feels that he isn't six feet under, but twelve.

Cannon (left) felt the full effects of the icy stare from US Secretary of State Hillary Clinton these last few days, which probably now makes him  a charter member of the Bill Clinton doghouse club, not because of any personal failings, but of the policy ones of the government he represents.

Mrs. Clinton arrived in Canada and spent a good portion of her time taking Cannon to task on any number of issues, high among her talking points an expression of firm resolve that the US would prefer that the Canadian Forces stay the course in Afghanistan and change that departure date of 2011.

She upbraided Cannon over his hosting duties for his Arctic conference, suggesting his guest list was short a few key players when it comes to issues of the arctic circle club and for good measure and as a parting shot on her way back to Washington, she took the Conservative governments thoughts on Third World maternal rights to task. Drubbing the Foregin Minister prior to his closing press conference of G8 Foreign Ministers (which she didn't attend) by advising that any discussion on that subject, requires a discussion on the topic of abortion and family planning, an interjection that the Liberals suggest means that the Conservative agenda on that issue is dead .

And while we can find some agreement with some of her observations on a few of her concerns, we're not sure about the method of delivery, nor is the irony lost of the US lecturing other countries about expanded inclusiveness and consultation, never really their strong suit over the course of history.

All in all, Cannon found himself at the receiving end of enough barbed commentaries, that we suspect he began to long for the House of Commons and welcome embrace and the less antaganostic efforts of the Liberals, NDP and Bloc Quebecois in Question period.

And while not quite the same level as some previous high profile disagreements, highlighted by the the days of Lyndon Johnson with Lester Pearson (don't come and piss on my carpet) or maybe when Richard Nixon described then Prime Minister Trudeau as an ass-hole and pompous.  It was perhaps the most open and transparent exhibition of American frustration with their Northern neighbours that we've seen in a while.

Though having Ms. Clinton deliver the American perspective does allow some elbow room for President Obama whenever he next meets with Prime Minister Harper.

It's an interesting display of American policy enforcement falling as it does on the heels of Vice President Joe Biden's recent trip to Israel where he took the Israeli's to task for their internal policies on expanding settlements.

There too, the full pressure of American foreign policy was delivered by a key member of the President's inner circle, leaving no misunderstanding as to the unhappiness that the US has with it's Allies that don't quite follow along with the textbook.

The Prime Minister gave Cannon a bit of a helping hand on the Afghanistan issue when he reiterated that Canada's decision to remove troops from that country will remain in place with the 2011 departure date still firm. Though we suspect that between now and then, the issue and how it evolves will become one of the main defining features of Harper's Prime Ministership thus far.

The Liberals took advantage of Mrs. Clinton's public expressions of concern to ask for a debate on Canada's future in Afghanistan leaving a window open it seems for some form of military engagement though not in combat, a possibility that even has some traction within Conservative circles, though for the Prime Minister it is a conversation  that isn't required, since it is his Government's intention to move beyond the mission in 2011.

We're not sure exactly, other than a less than subtle prod to change direction, what the Secretary of State hopes to gain with her enthusiastic and public rap to the knuckles, delivered over and over again on a number of Canadian media outlets.

In particular when it comes to the Afgahnistan issue, which for the most part has seen the Conservatives hold that flag pretty high these last few years despite the  growing casualty count and an underlying feeling of Canadians that the mission hasn't been moving forward fast enough towards its goal of a secure and stable Afghanistan.

And while we're sure that she and the American administration are more than aware of our contributions thus far in Afghanistan, we suggest that when it comes to the heavy lifting there, Canadians really doesn't need a lecture from her or anyone else.

For a Prime Minister that frequently has to push back against those that say he's too cozy to the United States, having the Secretary of State find fault with so many issues, may actually work in his favour should we end up back at the polls in the near future. Though as always, how he handles the after effects of the recent events will in the end dictate those results, and if past history is any indication taking advantage of opportunity never seems to be an easy fit there.

As for the effects on Mr. Cannon, it certainly won't do him any long term harm to be considered not in lock step with the American agenda, always a good thing when you want to walk on the world stage.

And after watching the full Hillary treatment for a weekend, hen pecked husbands everywhere have a new symbol to measure themselves against whenever they get together to talk about relationships, when it comes to getting nagged Mr. Cannon is seemingly the new poster boy.

They say that best friends should be able to speak at ease on any topic, though we suspect that for a few times this weekend, Minister Cannon most likely was wishing that some of those differences weren't quite so much part of what seemed like open mic night at the conference.