With 100 years in the rear view mirror, for Prince Rupert the future beckons 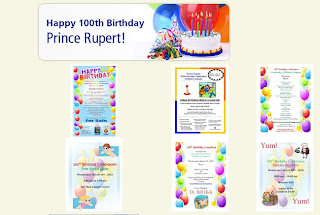 Prince Rupert threw itself a party on Wednesday, celebrating 100 years of incorporation with look back at its past and with a hope that the next 100 will provide it with growth and happiness for its residents.

A number of events took place at a variety of locations in the city, a pancake breakfast, a children's parade, a free swim for kids at the Earl Mah Aquatic Centre then the night's entertainment at the Lester Centre for the Arts followed by the big finale of the fireworks over the Civic Centre.

And while the Prime Minister didn't seem to be able to make it despite all those letters, there were still enough politicians around to shake some hands, all be it mainly of the local variety.

Not to be left out of the commemorations, the city's two newspapers provided extensive remembrances of the last 100 years, the Daily News providing one of its largest editions of the year spanning three sections while the Northern View also published it's own review of 100 years of Rupert.

The much anticipated opening of the time capsule from the seventies did not take place, the saga of its disappearance now the thing of Rupert legend, however, with plans to develop a new one in place for the next centennial, hopefully when March 10, 2110 rolls around residents will be able to review where we were and where we hoped to be 100 years down the road.

Like those future residents,  today's residents will also have to wait, at least for current reviews of the days events.

The Daily News online edition had not been updated as Wednesday came to an end, so we'll have to wait for their posting of some of the items of this centennial day on the net.

Wednesday's paper however did provide a well done and extensive review of the past history of the City something that might be handy for a time capsule we would think.

The Northern View's also was in the spirit of the day and their website provides us with a taste of their coverage of the centennial celebrations.

Happy 100th Birthday!
Glimpses of a Century
An illustrated history of Prince Rupert
The man behind the statue
Around longer than Rupert
A youthful outlook
Losing time in 2010
Friends in the neighbourhood
Prince Rupert’s mayor also marks 100 years in the city
Once a Rupertite, always a Rupertite
History through Shenton eyes
Across the water from Prince Rupert
Decoupaging Prince Rupert’s history

For a comprehensive visual look back at the history of Prince Rupert, there is a wide variety of photographs available on line from the Prince Rupert City and Regional Archives website, it provides a fascinating look back at the growth of the city from the days of muskeg and rock to today's cement and asphalt cityscape.
Posted by . at 1:13 am