Bruce Hood has a suggestion, just use the rule book when it comes to controversial hits 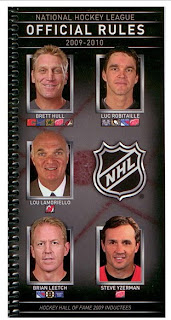 And perhaps they had the answer all along but could not see it!

With the NHL all over the map suddenly when it comes to enforcement of overly physical play ( a Cooke hit nets noting, a Wisniewski however merits an eight game suspension) there's a call from a former official to just re-read the rule book in particular Rule 43.1

Rule 43.1, which is easily found in dog eared (well maybe not so much these days it would seem) copies of the NHL rule book (or for net savvy NHL officials available on the internet) outlines what one former on ice official believes is the answer to much of the mayhem in the NHL of the last two months.

43.1 Charging - A minor or major penalty shall be imposed on a player or goalkeeper who skates or jumps into, or charges an opponent in any manner.

Charging shall mean the actions of a player or goalkeeper who, as a result of distance traveled, shall violently check an opponent in any manner. A “charge” may be the result of a check into the boards, into the goal frame or in open ice.

A minor, major or a major and a game misconduct shall be imposed on a player who charges a goalkeeper while the goalkeeper is within his goal crease.

A goalkeeper is not “fair game” just because he is outside the goal crease area. The appropriate penalty should be assessed in every case where an opposing player makes unnecessary contact with a goalkeeper. However, incidental contact, at the discretion of the Referee, will be permitted when the goalkeeper is in the act of playing the puck outside his goal crease provided the attacking player has made a reasonable effort to avoid such contact.

From that review of the current regulations, Bruce Hood, a former NHL official with a rather sterling resume of officiating consisting of 1,033 NHL regular-season games, 157 Stanley Cup playoff games, three all-star games and three Canada Cup tournaments has explained quite informatively that the solution to the hits to the head, boarding and blind side hits could all easily be tied up into one neat bundle called charging.

Mr. Hood outlines his thoughts for the Globe and Mail on the hottest issue of this NHL season and makes perhaps the best case yet for the NHL that they have the tools necessary to take on the challenges of the cheap shots and ugly incidents, all they have to do is read their own rule book.

Unfortunately for hockey fans (not to mention concerned players) his efforts seem to have fallen on deaf ears, in the course of the Globe and Mail interview Hood explains that he contacted NHL Commissioner Gary Bettman with his thoughts but was provided with a reply that suggested he was wrong.  The Commissioner explaining in reply that in his interpretation of things, such incidents as the Matt Cooke hit of a few weeks ago is legal under the guidelines of the current rule book.

This is bad news for those hoping for a quick fix to the problem, as past history has shown once Mr. Bettman makes a declaration there is no backing down, no retreat and never, ever do you hear the words "we were wrong".

And there we guess is the problem with the NHL these days, while its reassuring to know that NHL officials can read, it appears that comprehension is a bit of a struggle, not to mention interpretation of what seems quite simple to follow.

As Mr. Hood explains the charging rule, it seems perfectly logical to think that this could very well be the solution to  the string of ugly incidents that threaten to return the NHL to the back of the sports entertainment lines behind the likes of UFC, Roller Derby and any other combination of pseudo sports you can think of.

Alas, it's not the first time the league has been provided with a path out of a nasty situation (hello Mr. Balsillie sorry about those Coyotes) and has chosen to stick its head back into the sand, staying the course regardless of the path of misery it portends.

When give the chance to do the right thing and solve a problem before it gets completely beyond its grasp, the current regime always seems to dig in and take to the trenches, espousing a solid we know best mantra and a declaration to damn the outcry approach.

That might be good for Mr. Bettman's image as a stick to your guns executive, but in the end it seems that his empire is one that is showing far too many cracks these days, a good number of which seem to be rather self inflicted mistakes that could be easily solved.

Then again the easy route just doesn't seem like the NHL's style these days, now does it.

This item first appeared on the HockeyNation blog