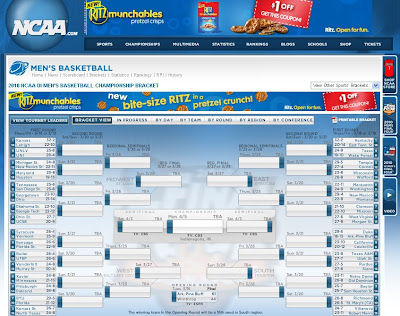 It is perhaps one of the best of sporting spectacles available on television these days, a month of elimination rounds that leads up to US College basketballs Final Four showdown, the April Championship in Indianapolis.

On Thursday and for every weekend to follow this month, the tension will rise and fall with every shot, as Dr. Naismith's invention rivets those that have become the true believers.

While the NBA may be where the money is, it is in this NCAA March Madness tournament that where the passion is found.

Small unknown Universities and Colleges can somehow against all odds, qualify for the 64 team elimination tournament, providing them with the chance to go up against the established legendary college programs of NCAA ball.

Every once and a while one becomes Cinderalla and goes on a tournament long run, though the reality is that most will have but a short burst into the spotlight before the cold, hard reality of elimination comes to call.

To watch the games of March however are to watch sport played at its highest emotional level. Sure many of these players know that they'll be high picks for NBA teams and all that will reveal for them in the future, but just as many more know that this is their last real chance to shine in a sports environment and they live with each second of each half of each game.

And while, despite the ancestry of Dr. Naismith, the game is clearly dominated by Americans now, there are still a few Canadian passports to be found in the ranks of this years March Madness contenders.

If Canadians, and especially British Columbians are looking to adopt a "home team" then they need look no further than Gonzaga University, the Spokane, Washington educational institution is home to four Canadians on the Bulldogs roster, Three British Columbians Bol Kong from Vancouver, Kelly Olynk of Kamloops and Robert Sacre of North Vancouver, Mangisto Arop of Alberta rounds out the Canadian contingent.

All told there are 11 Canadians stepping out on the courts in March Madness, included in the remaining seven are Maurice Joseph of Montreal who plays for the Vermont Catamounts, Devoe Joseph from Pickering Ontario a rising star with the Big Ten's Minnesota Golden Gophers, Andre Wilkins, from Toronto, who plays for Cornell University, Junior Cadougan also from Toronto who is with Marquette and Francis-Cedric Martel from Montreal, playing for the Richmond Spiders.

But perhaps the best chance for Canadians to have a team to root for through until the April championship comes from Syracuse, New York, where two Canadians are playing for the Orange.

Kris Joseph of Montreal and Andy Rautins, the son of Canadian legend Leo Rautins are both key players for the Orange. Syracuse is ranked by two polls as the number four team overall of the  64 heading into the tournament, considered a strong possibility to be there until the very last game.

However, the beauty of March Madness is that in any given game something special can happen and upsets are to be expected.

For Basketball fans there really is no better time than March, when the game is showcased for its speed, skill and emotion, a month long ride of tension that converts more and more fans to the game with each year.

It all gets underway on Thursday and the coverage of the sport has never been better!

In the US (and on Canadian satellite and cable tv), CBS Sports is the main provider of content, with games that start around 9:30 am on the west coast and carry on late into the evening, a smorgasboard of travel that takes the viewer on a whirlwind tour of the USA, to the various regional sites which host these opening round games.

The Score in Canada picks up a long list of games as well, often taking a keen interest in those games featuring the Canadian content. And just in case you might miss something, the NCAA website features an on line streaming home for much of the action and background to the tournament.

The Truly dedicated are the ones that take the bracket sheet and study it as though it is an ancient parchment, seeking to divine the ultimate truth, or in this case the best path for their team to make it to the final four.

That Journey is soon to be underway, stop on in and check out some of the action, you may come away from it all hooked as a fan for life.