Sharing our celebration with Alaskans 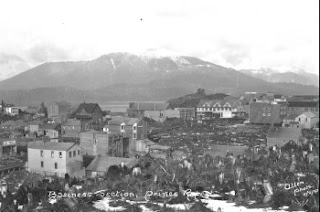 With the City of Prince Rupert set to celebrate it's 100th year on Wednesday, with a number of events planned on the local scene.

While the day's events are mainly for the benefit of local residents, the celebration of 100 years is being relayed to our neighbours to the north.

The Sit News, which is based out of Ketchikan has provided a review of the city's century long path through history, offering some glimpses of our past, from the early founding of the city, through to the tragic circumstances of Charles Hays ill starred journey on the Titanic, through to the arrival of the railroad, the war years, the boom years and these troubled years that have followed.

It wraps up with an eye on the recent past, when the dream of mighty shipping port as envisioned by Hays finally came to fruition, while the current economic situation of the world still leaves many with concerns, as we prepare for the celebration of the first 100 years, the hope is that the next 100 will deliver on much of the promise that many have seen for the city.

The review is from Dave Kiffer you can read it here, it makes for a companion piece for this previous look at Prince Rupert which was published in 2007 as part of a review of the completion of the Fairview Container Port, the two articles provide for an interesting look at how our neighbours have viewed our history through the years.

Photo above from the Prince Rupert City and Regional Archives (to view their on line collection click here)
Posted by . at 10:21 pm