Ridley Terminals fate seems to be moving to the fast boil 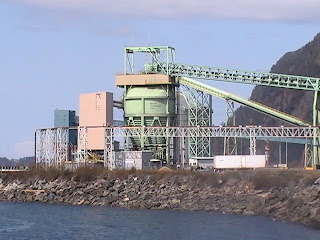 There's no shortage of intrigue over the recent revelation that there is talk of a private consortium once again showing interest in Prince Rupert's Ridley Terminals, the news item which first came out earlier this week has suddenly risen to the top of the list for northern BC  politicians, eager to find out more about one of the engines of the Northwest and Prince Rupert economy.

And if they were wondering what it all was about on Monday, the latest developments as relayed through the Vancouver Sun today should certainly catch their attention and what it all may mean for long term economic development of Prince Rupert's waterfront.

The Sun published and posted an article  in its business section on Wednesday, (read it here) which raises even more questions beyond what that consortium may be looking for in port access on the north coast.

Gordon Hamilton of the Sun recounts much of the territory we learned of earlier this week, bringing us up to speed on the developments with Transport Canada which is in discussion with the Port of Prince Rupert over the possibility of turning the ownership of Ridley over to the Port corporation.

The interjection of a group known as the Ridley Terminal Users Group could impact on that direction and eventual decision, though the Minster of State for Transport Rob Merrifield is certainly keeping his thoughts on the issue close to the vest. He told the Sun through the course of the article, that at the moment there is a review process underway to determine the best course of action for the future of the port, with a report anticipated later this spring.

As to where the recent developments from the private consortium fit into all of that remain uncertain, though Merrifield seemed determined to stress that at the moment, Ridley Terminals is not for sale.

Prince  Rupert Port Authority president Don Krusel, offered up some background for the article from the point of view of the port, outlining that he believes the initiative to move the Terminal into the larger holdings of the Port corporation would serve all stakeholders well and add value for taxpayers.

Sounds good, one would think! Happy stakeholders, value enhancement for the taxpayer, a win - win as they say in the world of business.

However, the Sun determined to cover all the angles of the debate sought out another perspective on the issue, turning to former Ridley Chairman Dan Veniez to offer up some thoughts.

The never media shy former Chairman, didn't quite see the big picture the same as Mr. Krusel however. Mr. Veniez's contribution to the debate was a review of the issue culled from his past background at RTI and with his interpretation of what he believes are the circumstance that are in play here.

Veniez outlined that he believes: "that the port is seeking ownership of the terminal to increase its asset base, which in turn, would enable it to borrow more money to finance the capital needs of the Prince Rupert port. The port is under-performing, he said. The port lost $939,000 in 2008 while Ridley Terminals turned a profit of $119,000. “They want the borrowing authority,"


Of course, Veniez's history with Ridley Terminals came to an end over the issue of privatization, with his apparent preference for the evolution of the terminal to be moved into the private sector, using "professional operators, such as Westshore Terminals or Kinder Morgan, who would charge market rates".

He and Ridley Terminals subsequently parted company in June of 2009, after his thoughts and those of the Transport Minister seemed to be going in very different directions.

As for the consortium that is suddenly the new face at the dance, the corporate template that they seem to be interested in using is that of Neptune Terminals in North Vancouver, which is  run by the two resource companies that use it. Offering up a plan that would propose: " a collaborative partnership with the port authority to manage and operate the terminal, not to own it. They would provide capital for needed upgrades, and pay the port a lease fee. he said. They would operate the terminal on a cost-of-services basis, rather than the current fee basis."

While all of these different scenarios work their way through the current review process, the mayors of the Northwest are looking for a more transparent form of information delivery, seeking to know how many proposals are floating around out there, and how they may impact on their various communities. They would like to be better informed on the process and be allowed the opportunity to comment on the developments of the moment and any of those that may come in the future.

The irony of that wish from local government for residents of Prince Rupert might raise an eyebrow of the locals, considering the rather long drawn out and secretive nature of events regarding from the City of Prince Rupert over Watson Island deliberations these days, but perhaps it could herald the beginning of a more dedicated effort towards transparency and full disclosure on all files of interest to the residents of the region.

For the moment however, the government officials like those of the rest of us that live and work on the north coast are just bystanders, apparently standing behind a tall fence with only a few holes in it from which we can get a glimpse of what's going on.

Hopefully, somebody opens up a gate soon and shares the blue print of the future for one of the key industries on the north coast.