Seeking the title in Thunder Bay 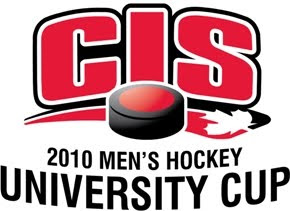 Canada's University hockey season will come to an end this weekend, as six teams take to the ice in Thunder Bay, Ontario to compete for the Cavendish Farms University Cup.

University hockey in Canada at times seems to fly under the radar, but has grown in stature over the last few years leading to more coverage of this weeks wrap up tournament.

Much like last weeks University Basketball championships, the early rounds are available via a webcast hosted on the CIS site, Thursday's games were provide for viewing as will the two games scheduled for Friday.

Saturday's semi finals and Sunday's Championship game will be broadcast across Canada on Rogers Sportsnet.

The full broadcast schedule can be found here.

Some background on the participating teams can be found from the links below:

Further information, results and statistics from the University Cup can be found on the CIS website.

News items on the tournament:

The above first appeared on the HockeyNation blog
Posted by . at 12:24 pm