While the world tries to pull together for Haiti, some just don't seem to get it 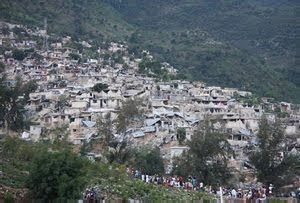 The pictures and stories from Haiti are heart wrenching, the long tortured island, the poorest in our hemisphere, struggles to find relief from the ravages of nature, all as we bear witness.
.
With the quest for the injured and the reclamation of the dead nowhere near begun, yet alone complete, with its citizens left to their own devices for the most part while the world tries desperately to mount a rescue mission, we are left as but bystanders to a horrible drama playing out on our television sets and on our computers.
.
CBC News
CTV News
CNN
MSNBC
BBC News
Fox News
.
This is a time for support, for concern and for those that believe, a time for prayer, unless of course you are Pat Robertson or Rush Limbaugh.

Both gentlemen are broadcasters with wide audiences, listeners and viewers who share every word as though it has been delivered from a high mountain top, both could do so much good and instead they have chosen to do much harm.

Robertson, a purported man of God, felt the need to interpret the horror of Monday's 7.0 earthquake which has levelled much of the capital of Port au Prince as some form of God's revenge, for some legend of a pact with Satan of all things.
.


.
This of course is a curious tact to take when disaster strikes, to lash out at the victims of today for something that supposedly took place over 200 years ago, suggesting that the compassionate face of a Supreme Being constantly projected by major religion, is instead a spiteful megalomaniac who would lay waste to an entire nation out of a grudge.

It is to laugh, if it were not so horribly sad the fate that the Haitian people face today.

Mr. Limbaugh for his part joined in on the chorus of negativity when only compassion is required, he taking as partisan a political path as one could take on a humanitarian disaster. Suggesting yesterday that this catastrophic moment shared by the world will be played out for political gain by an American president, who according to Limbaugh will use this moment to build back up his bona fides with America's black population, going so far as only Limbaugh seems able to do, as to differentiate between light and dark skinned Black Americans.
.

.
Today, he turned his wrath on the idea of donating towards Haitian relief, suggesting that Americans should not donate their reserves to any charity seeking to do good in a place where so much bad has taken place, stating that a donation today only puts you on a mailing list for the Democrats.
.
He went on to show that unique spirit of universal compassion of his, by stating that Americans have already given anyways, through their taxes. Apparently confusing the doling out of money in more ordinary times, with the clearly urgent need of assistance for today.
.
It shakes you faith in human nature to the core, these fossils of hatred, these shameful men so out of step with reality that they perhaps are as dangerous to the world as any enemy (real or imagined) that they feel is out there.

Fortunately there are many, many more good people rushing to Haiti's aid in these terrifying days, people with good in their heart and only the best of intentions in their souls.

It's those people and their spirit we celebrate and send our best wishes towards as they try to bring some humanity back to a country that must surely, if listening to the likes of Robertson and Limbaugh must feel abandoned.

These are a pair of apparently ego driven men who provide perhaps the most embarrassing example of the wrong that man can deliver, especially when others are only trying to do what is right and what is just.

Mr. Robertson is a television preacher who relies on donations to keep his ministry alive, likewise Mr. Limbaugh is an author, television and radio performer who collects monies from advertisers, readers and subscribers alike, the majority of which we imagine must go into his bank account.

Today, we can think of many, many more deserving locations for any of that money to be delivered, and many more people worth listening to, than either one of them.