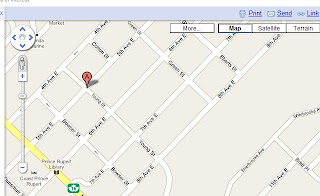 An apparent out of control house party on the east side of the city left a number of RCMP vehicles damaged, and neighbourhood nerves frayed, as party goers and RCMP members squared off in the early hours of Sunday morning.
The police radios crackled alive after midnight as the RCMP attempted to clear a house party in the 300 block of 5th Avenue East. As they began that process, the crowd apparently turned ugly and subsequently violent, allegedly throwing a number of rocks and other projectiles at the responding vehicles and officers.
At one point Prince Rupert Fire Rescue was called out to the scene on a standby basis, while ambulances were left on call in the area as well. As the stand off continued, extra reinforcements were called out to lend assistance to the on duty roster for the evening.
The increased show of force brought the melee under control shortly after 2:00 am, as party attendees began to clear the area, leaving a trail of broken glass and debris in their wake.
.
It is unknown at this time as to how many individuals, if any, were placed under arrest, or if any injuries were reported as a result of the early morning violence.
Posted by . at 1:31 am