Time to put Podunk on the map, or at least the game board 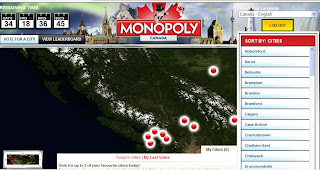 While we await our bright future ahead to unfold before us, perhaps we should be pro active in our efforts to make sure that Prince Rupert claims its fame on that most important of international platforms, the Monopoly game board.

The Hasbro company, who make and market Monopoly world wide, is launching a new Canadian edition and they are taking nominations as to what cities will fill on those many squares that bring us back to pass Go.
.
From the Monopoly.com website:

Instructions
MONOPOLY is launching a new Canadian Edition and is inviting Canadians to vote for their favourite cities. The vote will determine the top 20 cities and the top 2 wild card cities that will be the property spaces on the MONOPOLY Canada game board. Please vote for your friend’s cities or choose your own cities!

Every day you are able to vote for up to 3 of your favourite Canadian cities from our pre-selected list and to nominate one city not on the list as a wild card. To do so, select a city from the map and add to your cities, or enter your wild card city in the designated area. To keep the vote fair, you will be asked to register and to verify your email address via an email you will receive once your registration is received. Happy voting!

Voting on the site
.

From January 11, 2010 through February 21, 2010, each person providing their email address will be allowed to cast one vote per day for each of up to 3 of the pre-selected cities and one wild card city. From February 8, 2010 through February 21, 2010, registered users will be allowed to vote once per day for one of the top 10 vote-getting wild card cities nominated. Only one vote per city per day will be counted. For purposes of voting, a day is the 24-hour period starting at midnight EST each day during the Voting Period.

After February 21, 2010 no further votes will be accepted.

The final board of the top 22 locations determined from all valid votes cast will be displayed in June 2010.
.
So yes, we're off to a slow start here on the Podunk blog, only learning of the competition today, which unfortunately for us began on January 11th, however we're sure what we lost in the start can be made up for with a remarkable finish!
We can vote daily, though considering the late start with many other communities, we may have to vote in large numbers to play a little catch up. As of today there are 34 days left in the voting process to claim a stake of the board.

St. Jean sur Richelieu, QC, Calgary, AB, Quebec City, QC, Chatam-Kent, NB and St. John's Newfoundland, currently holding down the top five spots, the closest community to Prince Rupert so far on the list is Prince George, currently at 62nd place with but 0.4 of the vote.

You can find out more about the competition at the Monopoly.com website, which has the registration page required to begin to cast your votes.

Who knows if we play our cards right, we could be forever remembered perhaps (for the dreamers) grabbing the space once known as Boardwalk or for the pessimists maybe a (Baltic or Mediterranean Avenue).

Regardless, should we be successful in our efforts it probably goes without saying that City council will lay claim to all revenues that come from Free Parking!
Posted by . at 6:18 pm