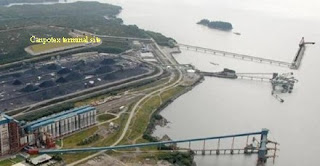 There's an interesting battle shaping up in the world of potash, as BHP Billiton Ltd., the world's largest mining operation prepares to develop its Saskatchewan project known as Jansen.

Billiton an Australian corporation hopes eventually to produce eight million tonnes a year, which would be nearly as much as Potash Corp. of Saskatchewan Inc. sold in all of 2008. The time frame for development of the project would see a completion date of 2013 or 2014.

Potash Corporation of Saskatchewan includes the Canpotex brand which is still trying to decide whether to stream its future investment plans to Prince Rupert or Vancouver.

What makes the arrival of Billiton on the scene interesting, is that the Australians apparently have expressed no plans to join the existing members in the potash cartel of Saskatchewan, meaning that they could very well go about setting their own prices and we imagine handling their own marketing and shipping requirements.

It would be the first North American production that was not sold through Canpotex, a very dramatic change in the culture of the potash business and one which could threaten Canpotex's ability to control supply and maintain pricing influence

Billiton is planning to spend some $240-million (US Funds) in early-stage work at the Jansen site, and financial analysts have speculated that the final construction cost of the project could be range in the 8-billion to 10-billion dollar area (all US Funds) if the company goes ahead with its plans.
The Financial Post has provided a fascinating look into the rough and tumble world of potash development with an article posted on the paper's website Tuesday that provides background on the issue. Not mentioned in the Financial Post article of Tuesday, is what shipping arrangements that Billiton has in mind to move it's product from Saskatchewan to the export markets of China and beyond in Asia.
Perhaps there's an opportunity here for the Port of Prince Rupert to attract yet another high profile partner to the North Coast, if Canpotex has developed cold feet for Rupert, then perhaps we can offer up some interest to the folks at BHP Billiton.
They're going to have product and we have a beach head for them all it may take is a reminder that we're here and open for business! There's a number of contact locations listed on their website, but with the kind of money being bounced around on this project a personal touch is perhaps called for.
If the folks at the Economic Development Department or the Port want to give them a call they can easily be reached in Melbourne, Phone: (61) 1300 55 47 57 or send them our specs by Fax at (61 3) 9609 3015.
If Canpotex continues to leave us hanging with its indecision on the Rupert terminal, there may just be another option out there for us after all. Who knows, in three or four years, Prince Rupert could be Billiton country!