A glimpse of a controversial period of Prince Rupert's past 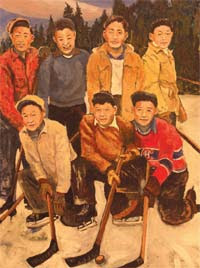 Henry Shimizu last lived in Prince Rupert when he was 13, a long time ago in the 81 year old man's life, but a period still fairly well placed in his memory, but not for all the best of memories.

The Globe and Mail's Tom Hawthorn has provided a profile of the former Rupertite, an acclaimed plastic surgeon in Edmonton, who now spends his days painting and who is showing a 27 piece retrospective of his life in the era of Canada's internment camps of the second world war.

Mr. Shimizu, who grew up in Prince Rupert left for good at 13, never to see his friends again when the government relocated his family inland during the second world war, barring them from a return at the end of the war.
.
Part of this country's policy of the time for what were called Canadian-born enemy aliens, a process that saw their property confiscated and sold and their families uprooted from their homes and banished to inland areas, for most it meant they would never return.

Hawthorn's profile provides a glimpse of Prince Rupert in those war years, one which gives us a sense of the climate of fear, of a community that turned against its neighbours and of an era where civil rights were overtaken by the climate of war.

From that article,there is this snapshot of life in Prince Rupert at war time:

Long before training as a plastic surgeon, he began his working life by folding napkins at the family restaurant in Prince Rupert. His father, Shotaro, known as Tom, had come to this continent from Japan in 1905 to work on the railway. He arrived two years later at Prince Rupert, an isolated port city destined for greatness as the western terminus of the Grand Trunk Pacific Railway.

The boom never happened - the city's founder, a railway executive, went down with the Titanic - but Tom Shimizu prospered. He formed a partnership with George Nishikaze, a former houseboy from Victoria with a reputation as a Western-style cook. The two men owned and operated the 30-room New Dominion Hotel and restaurant. Tom and Kimiko Shimizu and their five children lived in the hotel.

The business survived the Depression, thanks to the thrift of employing but not paying family members.

The outbreak of war in Europe in 1939 brought shipbuilding contracts to Prince Rupert. Men flooded in to construct frigates and corvettes. The cook prepared 50 lunches before dawn, sending them off with the men after they finished a hearty breakfast.

The two busy years brought a new-found confidence that evaporated with the terrible news delivered by radio in December, 1941. Imperial Japan had attacked the American fleet at Pearl Harbor.

"My parents knew right away there was going to be problems for them," Dr. Shimizu said.

His father tried to sell the hotel immediately, but was unsuccessful. In a few weeks, the city was inflamed, neighbours turning on their peaceable fellow residents. The Rotary Club, the Ladies Orange Benevolent Society and the local daily newspaper demanded the Japanese Canadians in their midst be rounded up and interned. In March, 130 residents were ordered to leave the city by train.

"I remembered being registered and getting a blue card on which I was identified as a Canadian-born enemy alien," he said. "But how can you be both Canadian-born and an alien?"

Henry, then aged 13, a Grade 7 student at Booth Memorial High, remembers a handful of classmates at the train station to see him off. "Where are you going?" one girl asked. "I don't know," he replied. He would never see any of them again.

Mr. Shimizu went on to become Dr. Shimizu, a much respected plastic surgeon in the Edmonton area, who became the first physician to re-attach a severed limb on the continent. He is the recipient of the Order of Canada and now an artist who now provides a remembrance of a troubled time in Canada's history.

Much of his life was lived long after he was forced to leave Prince Rupert, yet his memories remain vivid of a period of time where suspicion and fear provided for a forced exodus of neighbours.

The Globe and Mail article is a fascinating look at that life lived in a Prince Rupert that didn't show its best of sides at the time. You can review the entire article from the Globe and Mail's website here.

A further examination of Dr. Shimizu's life can be found on the University of Alberta's Express website and from it's folio website.
Posted by . at 7:53 am