Hockey Day in Canada, where the play is the thing 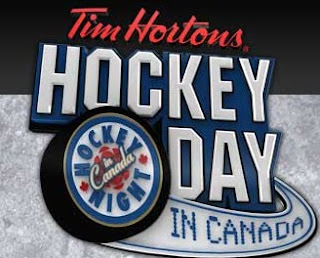 Stratford shakes off its theatrical robes for a day, pulls on a favourite hockey sweater and welcomes another Canadian passion to its stage, the 10th annual edition of what is now known as Tim Horton's Hockey Day in Canada.
While the adults warm up with a cup of the main sponsor's most famous beverage, a number of Stratford and area's minor hockey participants will be involved in a wide variety of events to help in the celebrations of national game.
Stratford, the host of this years festivities will serve as the main stage for the day, but there are many activities planned across the nation, with the CBC featuring live streaming coverage from such communities as St John's, Newfoundland, Ottawa, Ontario (from the Rideau Canal), Gimli, Manitoba, Auburn Bay, Alberta, Estevan, Saskatchewan and Victoria, BC.
The television proceedings get underway at noon eastern time, 9 am Pacific on the full CBC network. They will check in on all of their venues throughout the day, all part of the triple header of all Canadian action on the ice from Canada's NHL arenas.
The Montreal Candiens take on the Ottawa Senators as the two clubs kick off the NHL action at 2pm ET (11 am PT) from Scotiabank Place in the capital.
The Vancouver Canucks and Toronto Maple Leafs pick up the middle shift on Hockey Day, as the Canucks begin their Olympic games required marathon road trip at the Air Canada Centre at 7 pm ET (4 PM PT).
The Canucks may find one of the features of the day of interest, as Hockey Night in Canada host Ron MacLean offers up some tips for future referees, hosting a clinic in Stratford ( his lesson on interpretive lip reading is apparently quite helpful)

.
The nightcap for the day takes place at 10 PM ET (7 PM PT) as the Battle of Alberta begins anew as the Oilers take on the Flames at the Saddledome.
You can check out all of the events of the day from the CBC's Hockey Day in Canada website where all of the Hockey Day in Canada happenings are listed and streaming video options are available.
.
Item above is from the HockeyNation blog
Posted by . at 3:00 am