We've come a long way from the etch a sketch 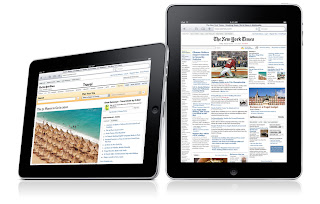 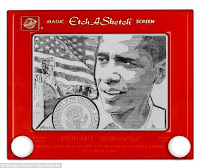 .
In the past, there have only been two previous tablets of similar nature, that have attracted as much attention as Wednesday's Ipad launch announcement from Apple.
There was the etch a sketch, a sixites pop culture reference that delighted many with endless hours of creativity on a grey scale screen drawing lines and making for much in the way of creativity.
And of course there was a fellow named Moses, who wandered down a mountain once upon a time with ten (fifteen if you believe Mel Brooks) rules for civilization to follow held on two stone tablets.
Yesterday, Steve Jobs provided the trifecta of tablet envy, with the introduction of the latest toy for the technologically curious.
.

.
The iPad, which appears at first glance to be a seemingly giant iTouch is already being heralded by the newspaper and magazine industry as its salvation (a testimony more to the trouble those industries are in at the moment than to any technologically advancement), with trend observers suggesting that soon we'll all be huddled around one of the screens seeking our daily input of information and entertainment.
As with any release from Apple, the Internet chat lines and forums quickly filled up with passionate debate as to the merits of the new creation, with quite a few praising such qualities as the speed of the processing to the price point of the initial models.
Others found the integration of the Ipad with other apple features found on the iStore as a definite selling feature.
There were a few complaints as well mind you, the lack of flash media abilities was considered a downside as was the lack of an SD slot for easy transference of photos and video as well as the inability to access more than one application at a time.
Still, the buzz has been building for the week and with its release yesterday the marketing assault will no doubt be set to go. If nothing else, Apple is by far the marketing leader when it comes to creating momentum for their product lines and the development of the culture of I want that.
What remains to be seen is if an Apple user already comfortable with their Mac or the laptops, not to mention the now ubiquitous iTouch or iPhone is going to find a use for the iPad that their current inventory of Apple products can't do.
Considering the success that Apple has in creating markets for its products and turning them into must have items, we imagine it won't be too long before we find that iPads are popping up around us, offering any number of changes to the way we look at information delivery and gathering.
Until it develops a niche market for itself, or one evolves for it, one wonders if for now, the the Ipad much like the etch a sketch of old, isn't more of a novelty than must have addition to your personal technological arsenal.
Some of the feedback from today's launch from both sides of the debate:
San Francisco Chronicle -- Is the iPad a Game Changer?
San Jose Mercury News-- Why Apple's iPad will change gadget world
New York Times-- iPad Blurs Line Between Devices
CBS News -- Larry Magid: The iPad is Underwhelming
Globe and Mail -- First opinions about the Apple iPad
Globe and Mail-- Why old media loves Apple's newest thing
National Post-- New Apple frontier half inch thick
Vancouver Sun-- Apple’s new iPad seen as a game-changing ‘breakthrough’
PC World-- iPad: I Think I'm Starting to 'Get' It
Philadelphia Daily News-- Is Steve Jobs' 'last great hurrah' really revolutionary?
Reuters -- Apple's iPad may underwhelm Hollywood
Reuters --Publishers embrace iPad, but revolution unlikely
Time -- Apple's Vision of the Future
Guardian UK-- Apple iPad: what it doesn't have
BBC News -- Apple unveils iPad tablet computer
ZD Net-- Dude, the iPad isn't a notebook - get over it!
Posted by . at 12:33 am