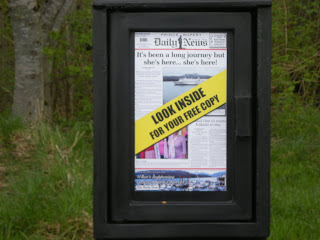 It worked out today to about ten cents a page, (two of which had the same story on them) as the new pricing structure for the Daily News finally went into effect at local news stands in the city.
It was a prospect first suggested back in November, when we first saw ads in the Daily that the price of the news stand copies of the local paper was to go up, but perhaps feeling that heading into Christmas wasn't the best time for a price increase, we managed to make it through December still plunking down but 75 cents for all of the Daily's interpretations of the events of the community.
Today however, Rupertites picking up their Daily News would have to find an extra 25 cents, as the news stand price jumped up to $1.00 per copy. A move that puts the Daily News closer to the pricing structure of the major Vancouver papers on a daily basis, providing for significantly less material (all be it some of it of local interest) at almost the same price as their southern competition.
It will be interesting to see what the extra twenty five cents does to news stand sales, if it drives customers to home delivery (which we imagine the paper would prefer) or if spending twenty five cents more so annoys the locals that they decide that they can do without the papers Monday, Tuesday and Thursday editions, preferring to wait for the "free" versions of Wednesday and Friday to arrive at their door step.
The times have changed from the days when the print version of newspapers ruled the information world, there now are any number of other options for news available online, locally we have information portals from websites such as those offered by CFTK TV News and the CBC Daybreak program, to the Northern View's rather comprehensive, current and "free" website, a site which frequently features updated stories through the day.
.
With so many options now out there, the timing of a price hike might prove to be a decision that puts the paper on a slippery slope of declining readership, especially when much of that material has been covered by other media sources before the presses even begin their run.
The increase came about today without any explanation in the paper as to what the need for the sudden increase was, something that perhaps might have been helpful for the reader, if for no other reason than to better understand the decision behind the price increase and to see if there is anything planned for future editions to make spending that dollar a worthwhile endeavour.
We imagine that there are any number of costs involved with a newspaper that in the end management decides have to be passed on to the customer, however, there comes a point perhaps where pricing beyond what the market will bear becomes a larger concern, creating more troubles for circulation than perhaps planned for.
Posted by . at 11:32 pm