Deltaport expansion takes Vancouver into the future of container shipping 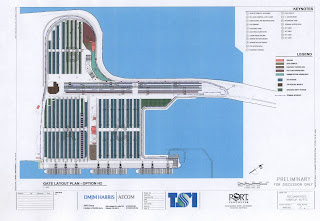 While residents of the North coast wait for further word from the Port of Prince Rupert about the much anticipated phase two expansion of the Fairview Terminal, down the coast in Vancouver container port expansion has become a reality.

Deltaport opened up its third berth today, a project that will add 50 per cent more capacity to the Lower Mainland's container terminal operations. It was a two year, 400 million dollar project that brings three new dual-hoist quad cranes into operation at the Deltaport facility. They are the first of their kind in North or South America, making it the most modern on the coast to date and providing for the easy handling of all cargo vessels in place today and those planned for the future.

The modernization and expansion program is designed to show the world of shipping that Deltaport is ready to meet their requirements today as well as tomorrow, a move that planners at the port believe will give them an added advantage in the competitive world of trans oceanic shipping.

With the increased capacity and marshaling yard expansion, Deltaport can receive more port calls and accept larger ships than has been the case in the past. It also will serve to create 356 more jobs for the cargo handling facility.
.
Before the expansion, Deltaport accounted for 45 per cent of all container shipping that comes into Canada's west coast, with the added capacity they hope to increase that share.

What's at stake in the competition for shipping placements is a share of growing Asia-Pacific trade numbers, which are anticipated to improve by another 50% over the next ten years.

A share of which Fairivew Terminals hopes to improve upon with their current operation and the planned expansion, what remains to be seen now is if the doubling of capacity at Deltaport has an impact on those expansion plans for the Rupert development.

CKNW featured a profile of the Deltaport expansion today on the Bill Good Show, how it has impacted on the local community and outlining the future for that port and how it hopes to evolve over the next decade. You can listen to that profile from the CKNW Audio vault ( January 18, 9am hour) or via the CKNW podcast library on iTunes.

Some other background information on the Deltaport Expansion can be found below.