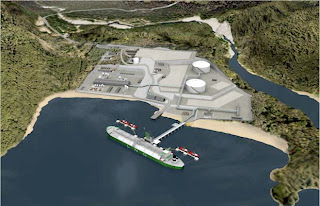 With the Eurocan mill set for closure at the end of this month, Kitimat could use some positive developments on its economic front and this week one of their irons in the fire got a little hotter.
Apache Canada, a major oil and gas investor in north and north eastern British Columbia acquired 51 percent of the proposed Kitimat LNG project, taking on a majority share of the proposed terminal and its potential capacity.
With the purchase the Texas based company also picks up a twenty five percent share of the proposed Pacific Trail pipeline, which is being led by Pacific Northern Gas. The 1.1 billion pipeline project that would see a 463 kilometre pipeline constructed to bring gas from Northern BC to Kitimat, with Apache's involvement many observers suggest that the gas will now come from Apache's Fort Nelson operations.
During the construction phase some 1500 construction jobs will be created, with 100 permanent jobs in place in Kitimat upon the opening of the terminal, should it of course make it through the various environmental studies and other regulatory requirements.
The Vancouver Sun and Globe and Mail both had detailed stories on the latest step for the project.
Kitimat's good news continued on through Wednesday, with news of a German bio energy company signing a letter of memorandum to explore the possibility of developing three million dollars worth of bio fuel generators in the city. On Wednesday, CFTK offered up some of the background on that potential development.
Both stories should offer a bit of promise for the community and should provide a significant boost to the economic base of the city should they move forward beyond today's developments.
Posted by . at 1:12 am