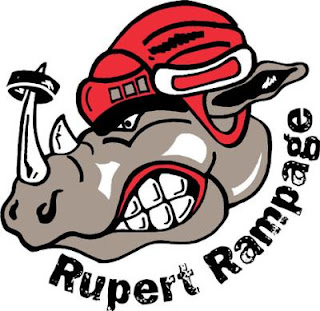 The line up for the CIHL playoffs is set and for the third place Prince Rupert any hopes of contending for the national championship will have to start with a series with the Smithers Steelheads.
With a pair of wins over the weekend over Hazelton the Rampage moved into the third spot in the Western Division, finishing the season with a record of 7-6-3, seven points behind the second place Steelheads.
The third place finish puts off a showdown with the league leading Kitimat Ice Devils who finished the season with 29 points on a record of sixteen wins and but two losses, Kitimat will now play Hazelton in the other Western semi final.
Terrace was eliminated from post season play after a season of struggles and a record of 3-12-1.
The Northern View provided a review of the weekend's action.
Details on the playoff schedule will be posted on the Prince Rupert Rampage website once dates are finalized.
Posted by . at 8:55 am