Hugs or Handcuffs? The downtown vandalism debate continues on. 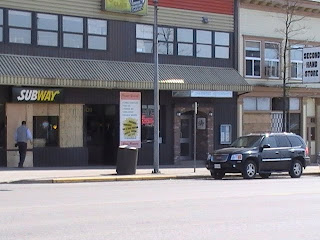 The Northern View provided an instructive look at some of the diverse attitudes in the downtown business community on how best to handle the ongoing troubles of vandalism and theft that seem to be common in the downtown core.
While many merchants have been increasing their security, mainly through the use of protective gates or solid aluminum doors, more than a few are suggesting that the courts need to become a little more active in the deterrence factor for those that continually damage or steal from their businesses.
Beyond the courts however, local business have in the past discussed such projects as a hired security service to patrol the downtown area, sonic equipment to create an uncomfortable sound to chase away potential troublemakers or a wide use of downtown cameras to target particular trouble spots. All items that will come at an increased cost, one that goes along with the current expenses involved in replacing windows, enhancing security measures and suffering from losses in stolen goods, a cost that eventually one would think has to be passed on to local consumers.
Others however, suggest that a lack of safe alternatives for youth provide much of the fuel for the late night smash and grabs or just mindless vandalism that occurs. Calls for a late night spot for youth who may have issues at home to gather at are used as a possible cure for the sprees of destruction. A thought that perhaps some compassion towards those inclined towards vandalism or theft may turn back those events.
A hopeful thought, but one we suspect which isn't universally held by many of the downtown merchants.
The Mayor recently outlined his thoughts on a number of possible partial solutions, a key one for downtown being that of bringing a return of the Citizens on Patrol program back to the city, a project that is apparently under consideration providing the commitment of local residents is exhibited to keep the program alive on an ongoing basis.
Until some kind of solution is found however, the broken windows and defacing of properties will most likely continue, each event bringing the downtown area closer to a visual image normally found in the most troubled areas of the larger cities of North America.
Areas that eventually find fewer and fewer visitors, leery of the image of window bars, riot gates and plywood boards as windows and what it says about that part of town.
Posted by . at 1:05 am