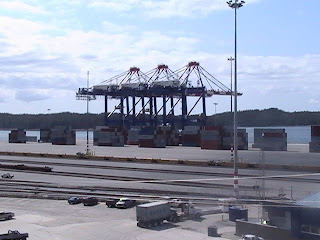 "our story of Prince Rupert is alive and strong. The Port of Prince Rupert the volume is up and the product continue to prove itself in the marketplace."-- From a CN Market Call transcript, Part of a days worth of positive spin on the Port of Prince Rupert and its gateway to the world.
Yesterday's scene setter from the Port of Prince Rupert has been noticed by a number of transportation related publications and websites today, all of which have posted items of note about the positive numbers at Fairview Terminals compared to the general malaise still being felt at other North American Ports.
As the Northern View outlined on its website yesterday, Don Krusel provided details on the positive through put numbers as posted on the publications website on Monday, offering up a glimpse of what may be ahead for the port in 2010 and beyond with its plans for Phase Two development.
CN Rail was one of the first to trumpet the success in Prince Rupert in 2009, with the publication of the transcript of their earnings call discussions, featuring the Rupert story on pages three and four of the lengthy review of the railroads last 12 months.
ProgressiveRailroading.com highlighted those numbers in a post on their website today, as did the Journal of Commerce which trumpeted the ports 46 per cent increase in 2009, the Cunningham report a widely read trade publication pointed out that the actual TEU's shipped through Rupert were still rather low, but highlighted the potential for the future of the Port and that's what has other ports worried.
And it's that future that many are still pointing towards for Prince Rupert as the plans for the second phase of development continue on, though not at as fast a pace as many in the city might like.
In the competitive world of transportation and shipping, you never know when the next big thing is about to come on the scene. Right now the buzz still seems to be about Prince Rupert's potential, but there are threats to that buzz on the horizon, a widening of the Panama Canal, a potential super port in Mexico and the sudden realization in Los Angeles, Seattle and Oakland that there is a very real threat to their business could all change the destination of those container ships in short order.
How all those factors play out may very well determine if the Port of Prince Rupert is still on the top of the list for the future of trade and transportation in the years to come, and if the Fairview Container port continues to bask in the glow of these positive reviews from the transportation media.
.
Other items of Note about the Port's numbers of this week:
Vancouver Sun-- Prince Rupert Port weathers lows in Pacific Trade
Opinion 250-- Port Of Prince Rupert Sees Decade High Numbers for Cargo
Prince George Citizen-- Traffic rises at Rupert port
Posted by . at 10:45 pm