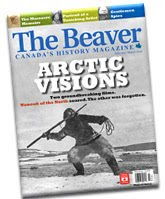 A name change of one of Canada's most venerable of historical magazines, the second oldest magazine in the land, is making for much mirth on the Internet these days.

The Decision of the Canadian Historical Society to change the name of The Beaver magazine to the more pedestrian title of Canada's History was based in part due to problems the magazine was having with spam filters designed to filter out references to pornographic material, the title which dates back to the 1920's has very different connotations these days, especially when it comes to the Internet.

The magazine which was once the pride of the Hudson's Bay Company has been a fixture for history aficionados for years, frequently testing the name change waters only to be rebuffed by the subscriber base who it appears were traditionalists.

However, if the magazine is to grow, the quest for new subscribers surely can't be sidetracked by troublesome search requests.

The name change could save would be readers from any embarrassment and dirty looks, should they ask by name a little too loud as to where to find the historical publication, only to be misdirected to a section with a much different take on culture and history.

Still a little bit of our history will disappear with the April edition, as the Beaver moves away from it's more familiar identity.

While the publishers await the date of changeover, they can sit back and enjoy the sudden surge in interest in the publication, which has probably received more attention this week than it has in a long, long time.