UFAWU still waiting for response from Feds on fishery crisis 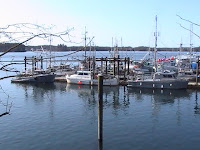 "The minister hasn't even bothered sending us a letter, or even acknowledging our letters," -- UFAWU Northern Representative Joy Thorkelson outlining the response thus far from the Federal Government on vital fishery issues on the north coast.
Joy Thorkelson has called returns on the Nass the worst she's ever seen and the size of the fishing fleet setting out from Prince Rupert this year is the smallest in memory, highlighting a number of concerns over the state of the Pacific salmon fishery this year.
With the fishery in a crisis mode as far as UFAWU is concerned, the union is seeking out assistance from the Federal Fisheries Minister Loyola Hearn, a request that so far hasn't been making much headway nor gained much comment.
The Daily News featured the fishery situation on the North Coast as their front page story in Friday's paper.
FISHERMEN URGE BAILOUT AS SEASON SINKS OUT OF SIGHT
Licence holiday, one-off payment called for from feds to offset a 'desperate' summer
By Kris Schumacher
The Daily News
Friday, July 11, 2008
Pages one and three
Despite having sent a letter to Fisheries and Oceans Minister Loyola Hearn more than three weeks ago regarding the West Coast fisheries crisis, the United Fishermen and Allied Workers' Union is yet to receive a response from the federal department.
UFAWU Northern Representative Joy Thorkelson says fishing on the Nass River has been the worst she has ever seen, and that based on the most recent escapement numbers the Skeena fishery "doesn't look good either". In 2007, the fishery only opened for a total of seven days, and even with significantly fewer boats planning to fish the North Coast this year, the commercial fleet will undoubtedly be taking even fewer fish this season.
"There are only 200 boats up here, the smallest fleet we've ever had," said Thorkelson.
"I'd guess the peak last year was 350, the normal fleet size we've had over the last four years has been 450 boats, and there are just over 650 licences for the North Coast. So because of the price of fuel, among other things, the rest of the guys are desperate. They're trying to find another job or they're on welfare, and our problem is that their boats aren't being maintained, because next year should be a decent year."
On June 18, at Thorkelson's request, Prince Rupert city council sent a letter to Fisheries and Oceans Canada asking for a licence holiday and a one-time payment to boat owners for maintenance for fishermen who voluntarily tied up this season, because most will find it difficult to even turn a profit with the culmination of low fish numbers and high gas prices. In fact, fishing groups from all over B.C. have sent requests to DFO asking for relief to get them through what will surely be a disastrous summer.
"The minister hasn't even bothered sending us a letter, or even acknowledging our letters," said Thorkelson.
"Down south it's just as much of a crisis. If they fish, in all likelihood they won't fish until September."
Skeena-Bulkley Valley MP Nathan Cullen signed his own copy of the letter requesting a commercial licence holidays and sent it to Minister Hearn.
Cullen sent the letter earlier this week, and says he is in full agreement with fishermen on the need for short-term solutions while a long-term strategy is sought. He recognizes that fishing this season is not worth the costs, as it is simply too expensive for the commercial fleet to be out on the water, and yet people are still trying to make a living.
"The government could play a very significant role, and I think it's just about paying attention to this fishery and recognizing that it's in a state of crisis and that the government does have a role in it," said Cullen.
"The government can say that they're interested or concerned, but it's all in the actions. And so far they've shown themselves to be dismissive of this reality. We're going to put a call in to the office to try and hurry things along, but this is not something they can ignore. It's just irresponsible and uncaring."
"This has been the slow and steady decline of the ability to fish on this coast," said Cullen.
"It's been a combination of low fish returns, mismanagement, and the federal government not paying enough attention to the Northwest. It's quite discouraging.
"There are signs of hope, in terms of getting a better management plan for the whole Skeena, one that we control a lot more of. I'm cautiously optimistic, not about this particular fishing season, but the long-term prospects of getting a more sustainable fishery here for people."
Posted by . at 8:25 pm