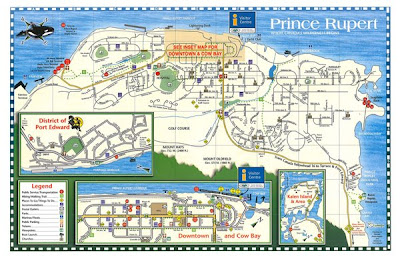 The CBC website has details regarding a gas leak in the 600 block of 6th Avenue West on Monday afternoon, which had up to 75 homes evacuated as a precautionary measure during the course of the incident.

The leak which took place between Fulton and Tatlow is thought to be the result of work being done in the area at the time.
.
.
Update: 6:30 PM:

Residents of the area have been out of their homes for a number of hours while officials continue to investigate the situation.
.
Roads to the area are still closed, with RCMP officers on hand to steer away the curious. PNG work crews responding from Terrace, were expected to be on site before 7 PM.
.
Update 7 PM: Shortly before 7pm Pacific Northern Gas officials began working on the affected area, which was near the Black Rooster Roadhouse. Roads were still blocked off in the Tatlow to Fulton area as the crews began their work. The city's Emergency Social Services program had gone into effect by 7 pm with a reception area set up in the Auditorium of the Civic Centre, providing information and shelter options for those in the area still blocked off by officials.

Update: 9:30 PM: Northern Gas crews were still working on the area in question, with no time frame available as to when the roads would be re-opened or residents allowed back into their homes in the vicinity.
.
Mayor Herb Pond gave the CBC a short synopsis of the situation ,which he says began during a home renovation project. it's not known if the city crew working in the area at the time on Monday, was involved in that project or if the incident is a separate situation. "There's still a pretty heavy smell of gas in the air. There were lots of residents walking down, not able to return to their homes for several hours."
.
Update 10:30 PM: Roads in the vicinity remain closed, while residents of adjoining apartment buildings and residences are being allowed to collect a few belongings from their homes, indicative that they most likely won't be allowed to return to their residences tonight.
.
As a side note to this incident, the city website which could a useful tool and be of some good use in a situation such as this, doesn't provide anything in the way of information for those looking for details or an indication as to the status of the problem.

Update Midnight: RCMP remain on scene overnight to keep residents from returning to their homes and keep a watch for overly inquiring types in the area. The city's Emergency Social Services Centre at the Civic Centre has closed for the night, having placed many of the affected residents in alternate accommodations for the night. No further information on the situation is expected until morning.

The affected area is in the 500 block of 6th Avenue West, between Fulton and Taltow streets, Prince Rupert RCMP said.

Residents will likely be out of their homes for at least three hours while crews investigate the damage.

Police say the leak was probably caused by construction in the immediate area.


Prince Rupert is about 720 kilometres west of Prince George.
.

A gas leak on Monday afternoon shut down 6th Avenue West from Dunsmuir to Taylor Street, as well as portions of 5th Avenue West, the streets linking 6th to 7th and Fulton Street from 3rd Avenue to 7th Avenue West.
.

RCMP and the fire department responded and evacuated residents as needed. The situation was ongoing as of press time.