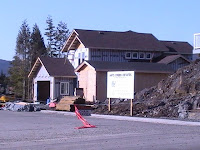 “The market in most of our communities has moved into what the economists would call a buyers' market giving all those people who were waiting to get into the market the opportunity to finally do so,"— Willy Berger of the BC Northern Real Estate board, commenting on the swing in market conditions in Northern BC.

There are more houses on the market, at a higher price than most of us are used to. But when a buyer finds a house they like, it tends to sell fast.
However, the real estate market is about to undergo another shift, with the numbers of homes that sold having dropped over the first six months of 2008.

Those seem to be the conclusions we can draw from the recently released numbers from the Northern BC Real Estate Board.
.
As we outlined on our Podunkian portal a few days ago, MLS listings in Prince Rupert have shown increases in pricing and increases in inventory, but the splurge of purchasing has leveled off, leaving buyers in an envious position as the summer months move into fall.

While prices are still high, the number of houses selling in the Prince Rupert market in the first six months of this has dropped dramatically compared to last year.
According to statistics released yesterday, 87 properties worth $17.2 million changed hands through the Multiple Listings Service in the Prince Rupert area this year, compared to 131 properties worth $23.7 million in the first half of 2007.
The median price of the 63 single-family homes sold was $185,000 - up from last year's median of $152,000.
Willy Berger, president of the Northern B.C. Real Estate Board, described the shift that has taken place across Northern B.C. as a move toward a "buyers' market."
"The market in most of our communities has moved into what the economists would call a buyers' market giving all those people who were waiting to get into the market the opportunity to finally do so," said Berger.
"The interest rates for mortgages still remain in the single digits, making home ownership more affordable than even a year ago."
While homes are selling faster, clearly, there are more houses on the market. Last year, it took on average 104 days for a single-family home to sell, while this year is has taken 68. At the end of June, there were 247 properties of all types available through the Multiple Listings Service in Prince Rupert, up from 172 a year ago.
The situation is the same in Terrace where 169 properties valued at $31.6 million have sold so far this year, compared to 192 properties worth $27.8 million in the first half of 2007.
There are 100 more properties on the market this year compared to the same time last year.
Despite this, Berger remained positive about the outlook for the market, noting it provides choice for people in the housing market.
"There are 36 per cent more properties available on the Multiple Listing Service in northern B.C. than there was a year ago, giving buyers for any type of property a good selection to choose from," said Berger.
And the future of the northern economy continues to look bright.
"The economic outlook for northern B.C. continues to remain positive, even though the forest industry has had major adjustments. The mining industry and oil and gas exploration are reaching all-time highs in the region," he said.
Overall, there have been 2,570 sales through the Multiple Listings Service in the first half of this year compared to 3,408 in the same period last year and 3,421 in 2006.
Posted by . at 12:38 am