New manager sees big changes ahead for the Highliner Hotel 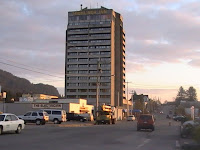 Prince Rupert’s tallest building will soon see some major renovations take place, as the downtown hotel now known as the Highliner Plaza Hotel & Conference Centre, gets ready to change things around inside.

Curtis Sagmeister, took over the General Manager’s duties last week, bringing three decades of hotel and tourism experience to his new job in the city. He joins the Highliner as they prepare to begin several hundred thousand dollars of work on the downtown landmark. Including renovation of the guest rooms, restaurant, lobby and lounge areas.

The Daily News provided some background on Sagemeister and the future plans for the hotel in Tuesday’s paper.

New manager has high hopes for high-rise hotel
By Kris Schumacher
The Daily News
Tuesday, July 08, 2008
Page five
With almost three decades of hotel and tourism industry experience under his belt, the new General Manager of the Highliner Plaza Hotel & Conference Centre, Curtis Sagmeister, knows he's the right man for the job.
Sagmeister replaces former manager Don Martin, who has relocated to Vancouver to oversee renovations and capital projects for buildings owned by the parent company, including those changes planned for the Highliner Plaza. Having moved from Hinton, Alberta, recently, Sagmeister is excited to concentrate on renewing the service spirit of the Highliner Plaza, developing business and improving the hotel's community image.
"We have a great bunch of employees here at the Highliner Plaza. What we need to do now is focus our energies on developing a service culture within our organization that produces a positive experience for our guests," he said.
"We're planning some major renovations probably around October, which will involve re-doing our rooms, our restaurant, our lobby and our lounge areas. It's going to be in the range of several hundred thousand dollars, and honestly it needs it."
.
With a range of improvements set for this fall, guests and employees of the Highliner can expect to see major changes that will hopefully revitalize healthy competition between it and other hotels in the downtown core.
Sagmeister knows that only by growing along with competitors can the hospitality sector move forward and create a great tourism product that will draw even more visitors in years to come.
"We have our challenges and hurdles in the community, and while I'm still learning what some of those are, our product here does need some polishing and some shine, and we need to contribute to that as a hotel and a major icon in the community," said Sagmeister. "I hope that by all of us improving, people start taking Prince Rupert very seriously as a destination and come and enjoy everything this area has to offer.
Known for his extensive community involvement, Sagmeister has numerous awards and accolades in his field, including being honoured as a finalist in the ALTO Awards for tourism marketing and an annual recipient of the Housekeeping Award in Alberta.
Having always maintained a high community profile in his previous positions, once settled he will be promoting the Highliner, contributing to community events, and doing what he can to make his new home the best place it can be.
Having been in Prince Rupert for just over a week, Sagmeister has already experienced some classic North Coast precipitation as well as two glorious warm days, including a sunburn while taking in the Canada Day festivities.
In addition to his optimism about the future tourism development of the Highliner and the general community, Sagmeister is confident his new home will be accommodating to at least two of his personal hobbies.
"I look forward to some great quadding and photography experiences in the area, and those opportunities were one of things that drew me to the area being two of my favorite leisure activities. I work hard and play equally hard, and the Prince Rupert area is a perfect fit for my lifestyle."
Posted by . at 12:18 am