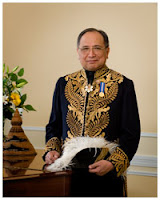 Lieutenant Governor Steven Point, The Queen's representative for British Columbia was in Prince Rupert his week as part of the First Nations Elders Conference, partaking in the opening celebrations and the emotional Spirit Pole ceremony to name a few of his activities on his schedule.
The first person of Aboriginal descent to be named to the ceremonial position, Lieutenant Governor Point was in familiar territory as he arrived in town, a former lawyer and judge in the city from 1999 to 2002 he made many connections with the city during his time here.
He recently has begun a process of trying to involve himself in education, trying to visit every school in the province, providing a source of inspiration for the province's youth. He recently hosted Roosevelt Park students during a recent trip to Victoria which included a stop at the BC Legislature.
During his stay in the city for the Elders Gathering he provided an interesting review of his life and the path that led him to become the Queen's Representative to the province. It was featured in Wednesday's edition of the Daily News.
'You can achieve greatness': Lieutenant Governor
BY CARLA WINTERSGILL
The Daily News
Wednesday, July 09, 2008
Pages one and two
Lieutenant Governor Steven Point may be the only person who is upset that school is out for the summer.
"I was planning on going back to see the Roosevelt students, but school's out," said Point, who recently hosted Roosevelt students during their trip to the legislature in Victoria.
While in town for the Elders Conference, he was hoping for the chance to see the students again.
"We're trying to visit every school in the province, but I didn't realize that there were thousands of schools in the province when I said that. But we're still trying to make it to all the schools."
Point wants to teach students that any future they dream for themselves is possible.
"I try to encourage the young people that they can do anything they want," said Point.
"There's no barriers anymore. You can go on to get your education, you can achieve greatness."
Before being appointed Lieutenant Governor, Point was a lawyer and a provincial court judge who served Prince Rupert between 1999 and 2002.
He also served as an elected Chief of the Skowkale First Nation and as the tribal chair of the Sto:lo Nation Government.
Point is British Columbia's first Aboriginal Lieutenant Governor.
"Certainly, now I see myself as a role model.
"When I started in October last year it was all a bit of a whirlwind. I wasn't really sure how I'd be received when this happened, with representing the Crown and everything. For Aboriginal people, the Crown hasn't represented many positive things," he said.
"But the reception from First Nations has just been amazing.
"We just continue to get feast and dinners. They are so happy that someone First Nations has been selected to be the Lieutenant Governor of B.C. The little kids come up and they want their picture taken. They want an autograph. It's been very exciting for them."
When Point was attending law school in Saskatchewan, he remembers one of his professors telling him that part of the problem with their Aboriginal people is that they don't believe in themselves.
"We suffer from low self-esteem. Lots of people in the community did, and I did too," he said.
But Point wants to change that perception among First Nations youth.
"I've been trying to help them realize that despite the history of what Aboriginal people have through in B.C. that we're here, we're surviving, we're strong people. They need to start thinking about themselves and what they're going to do and what part they're going to play to find their place in society," Point said.
"But there's all kids of opportunities. You don't just have to stay at home. You can come out into the community and do almost anything. I'm hopefully helping them realize that the opportunities are there for them. Things are different today. It's good. It's a very good time for Aboriginal people."
Posted by . at 2:04 pm