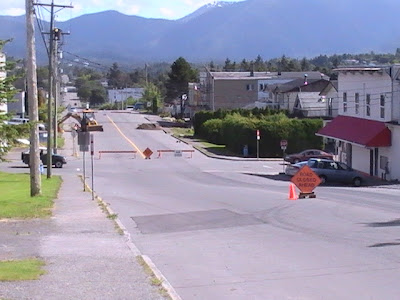 The city still had Sixth Avenue West blocked from Fulton to Tatlow through the day on Tuesday as PNG crews continued to work on the gas line running near the Black Rooster Road House.
.
.
The Daily News provided much of the same information as other media outlets around the city in their Tuesday edition with little in the way of an update from what was already known about the incident.
.
.
The Northern View also provided much the same information in their update posted on line to their website.
.
.
Homes vacated after gas leak hits Westside
The Daily News
Tuesday, July 22, 2008
Pages one and two

At approximately 3 p.m., Prince Rupert RCMP were called to help set up blockades after the gas leak was reported. The scent of gas was noticed as far away as downtown, and all the way to McBride.

RCMP, along with the Prince Rupert Fire Department and the City of Prince Rupert, evacuated the area, that included a couple of apartment buildings, according to Const. Krista Vrolyk.

The gas was then shut off, as the city, PNG, and the fire department worked to rectify the situation.

"It appears (work crews) were doing some work, and the line was cut," said Vrolyk.

RCMP believed the problem would be taken care of by today, and residents were set to start to return home last evening.
Posted by . at 12:51 am