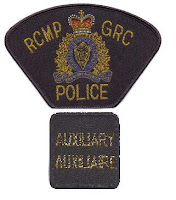 The RCMP will be holding an information session on Thursday night at 7 pm at Northwest Community college, designed to provide information to local residents that may be interested in volunteering some of their time to the RCMP auxiliary program.
For some it's a chance to give back to the community a bit, providing assistance to the regular force and freeing them up for priority policing duties. For others it could very well be the path to a full time position with RCMP at any one of the detachments across the country.
The local auxiliary program has seen its numbers dwindle over the years, partly due to the exodus of residents due to the economy, while some others left the program when sidearms were no longer issued to those working as auxiliary officers.
Auxiliaries provide a number of services from community policing functions to ride along duty with regular officers on patrol. The age limit for participants in 19 and potential auxiliaries must have a high school diploma or equivalent, possess a valid B.C. drivers licence and be in good physical condition. Any applicant must also be able to successfully obtain an RCMP Security Clearance.
The Wednesday Daily News featured details on the Thursday night information session and some background information on what the program is all about.
Local volunteers now on RCMP's most-wanted list
By Kris Schumacher
The Daily News
Wednesday, July 23, 2008
Page two and three
Tomorrow night the Prince Rupert RCMP is on a mission - recruiting the next generation of Auxiliary Constables in the community.
At 7 p.m. on Thurs., July 24, three experienced Auxiliary Constables will host an information session for anyone interested in becoming a member. The session is set for Room 155 of Northwest Community College.
Volunteering their time in the community, Auxiliary Constables are citizens who perform authorized functions in support of strategies to enhance public safety in the cities, towns and villages they live in. While their primary function is to participate in community policing activities aimed at public safety and crime prevention, Auxiliary Constables like Dan Trask and Mike Pilon are also called up when there are big events in town or when serious situations escalate and the police need large numbers to coordinate things.
"During the All-Native Basketball Tournament I go out four nights in a row, and Seafest two or three nights in a row," said Trask. "And (Monday) night I was out until midnight helping out with the gas leak, so there can be some long hours. But I enjoy helping out, it's great to give something back to the community that I've lived in almost all my life."
Trask said when he became an Auxiliary Constable six years ago, there were as many as 13 such members. But with several people eventually taking full-time jobs with RCMP detachments in other cities, and a few not able to dedicate the necessary 160 hours a year any longer, the volunteer force fell down to only five or six dedicated members.
Prince Rupert RCMP Community Policing officer Const. Krista Vrolyk said taking the program can be a way to become a full-time RCMP member.
"We ask for a two-year commitment to the program, and it gives some people who are sort of interested in law enforcement a taste of what it's like," said Vrolyk.
"Which means essentially, you'll have a year to do auxiliary work, write the exam and then if successful within a year get a call to go to depo."
The RCMP will be offering winter training classes for the Auxiliary Constable Program starting this fall, with the new group graduating in Spring 2009.
Auxiliary Constables in Prince Rupert are active in crime prevention programs, home and business safety checks, child identification programs, personal safety lectures and demonstrations, community and special events, SpeedWatch as well as police ride-a-long functions.
In order to qualify to take the program, people must be a minimum of 19 years of age, a Canadian citizen, be of good character and reputation, must have a high school diploma or equivalent, possess a valid B.C. drivers licence, be in good physical condition, and successfully obtain an RCMP Security Clearance.
"One of the things the RCMP members really enjoy is that these guys are locals. They know who's who, they know the fastest routes and where we might find people," said Vrolyk. "Their local knowledge really helps us because a lot of us are just coming into town from another community, and most auxiliaries have been here forever."
Auxiliary Constable Mike Pilon said that in addition to giving back to the community as a volunteer member, auxiliary members also get to see a side of the community that most residents normally don't see.
Pilon and Trask both came through the program at the same time six years ago.
They said they've learned a lot in that time about the city.
"There's really no downside to this, other than committing some hours," said Pilon. "It is a commitment; something you and your family have to be prepared for, and the training period is 96 hours of classroom training and 40 hours of physical defence training. And when you're local and lived here your whole life, sometimes people have to put the law between them and their friends, which could be hard for some people. But overall it's a great opportunity and it's a very rewarding way to spend a few hours a week."
Anyone with any questions about the RCMP Auxiliary Constable program is asked to attend the information session on Thursday or contact Const. Krista VROLYK at (250)-622-7700.
Posted by . at 11:51 pm