A growing pile of Alberta right here at Ridley Island 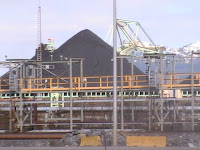 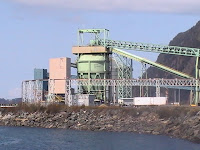 The Globe and Mail posted an interesting story in the Report on Businnes section of last Friday's paper, outlining how Suncor out of Fort McMurray is making use of the Port of Prince Rupert to ship out petroleum coke, taken from the giant processing pits of Northern Alberta.
Suncor's growing piles of petroleum coke, combined with the purchase by CN of a little known railroad in Northern Alberta point to perhaps yet another positive development for shipments out of Ridley Terminals.
It is a project that continues to build on the theme of Prince Rupert becoming Port Alberta, as that province takes advantage of its close proximity and growing links to the Port of Prince Rupert.
EXPORTS
Suncor's coke solution? Ahoy, Port Alberta
PATRICK BRETHOUR
pbrethour@globeandmail.com
July 25, 2008
PRINCE RUPERT -- The massive pyramids of coal on Prince Rupert's Ridley Island are anonymous, but one has a story to tell.
The coal pile in question belongs to oil sands giant Suncor Energy Inc., which is already shipping a half-million tonnes a year through Prince Rupert to Asian and Mexican ports. Suncor hasn't decided to branch out into the coal mining business. The coal - to be more precise, petroleum coke - comes from its upgrading operations in Fort McMurray, Alta.
Although it looks and feels like coal, petroleum coke is literally the dregs of the (oil) barrel, the leftovers after crude oil and other liquids have been extracted from gooey bitumen. Until recently, petroleum coke has been something only a step above industrial waste: worth little, but a potentially big environmental headache for oil sands firms that are far from any sizable market.
Suncor alone stockpiles three million tonnes of the stuff in a year; it burns a million tonnes to power its upgrading operations, but that amount is not likely to rise because of coke's heavy carbon footprint. So, every year, the stockpile in Fort McMurray grows ever bigger, with just a trickle dribbling out to the West Coast. Without an outlet, the best use of petroleum coke will be as landfill - far from an ideal material, if the seemingly eternal underground coal fires of West Virginia are any guide.
But a confluence of tectonic shifts in the energy market, and a somewhat obscure short-line railway, are radically altering the economics of petroleum coke. Oil sands production, propelled by soaring prices, is on a rocket ride. That will drive up the volume of petroleum coke, particularly at Suncor, which will be producing close to nine million tonnes by 2012, making it one of the largest sources of coal in Canada.
Rising coal prices are key. Even though petroleum coke sells at a discount to thermal coal, its price increased fivefold in the middle part of this decade, and has continued to rise since. What had been a problem for the oil sands could now be transformed into profits - if it can be brought to market.
And that is where Prince Rupert, and a little heralded acquisition by Canadian National Railway Co., come in. Last December, just before Christmas, CN issued a press release detailing its purchase of the line running from Fort McMurray to Boyle, Alta., a dilapidated line bought for a bargain $25-million, plus a vow to spend more than five times that amount on upgrades. Long-term volume guarantees from Suncor, and two other oil sands producers, OPTI Canada Inc. and Nexen Inc., were a cornerstone of that acquisition, according to CN.
By the time Suncor is pumping out nine million tonnes of petroleum coke in 2012, those upgrades will be long completed, opening the path for the export of an enormous volume of petroleum coke from Fort McMurray, through the Rocky Mountains, to Prince Rupert and Ridley Island - and on to Asia. At today's prices, that amount of petroleum coke would top $1-billion a year - even for an oil sands company, that is serious money.
For Don Krusel, chief executive officer of the Prince Rupert Port Authority, the prospect of handling mass volumes of petroleum coke, along with other Prairies commodities, is part of his vision of turning the shipping route in northern B.C. waters into a transit corridor snaking back into the middle of Canada. He's hoping that the upgrades to the port, including the new container ship facility, will shift the mindset in landlocked provinces, opening their eyes to the possibility of Asian exports, and to thinking of Edmonton, Lloydminster and Fort McMurray as part of one export system that leads to the open waters of the Pacific. Mr. Krusel has a phrase that sums up that shift in thinking: Port Alberta.
Petroleum coke is part of Port Alberta. Sulphur - another formerly unwanted byproduct of the oil sands - could be as well, if Ridley Terminals is successful in finally getting its specialized facility up and running. Canpotex's recent announcement that it will build a potash facility on Ridley Island is also part of the picture. Mr. Krusel sees a day, not too far away, when grain, sulphur, even beef and poultry, are flowing from the Prairies through to Asia.
.
Ahoy, Port Alberta.
Posted by . at 1:41 am