Tim Horton's may have roll up the rim, but in Prince Rupert, Subway has roll down the shutters! 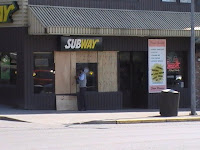 "I went to council and tried to do something, they said that they're aware of everything, but they don't do anything... Nobody knows better than me what I'm going through. They need to come and find out" -- Local restaurant operator Naripjit Sahdra, expressing his exasperation at the troublesome problem of downtown vandalism against his operation.
Nine broken windows in a year is more than enough for a local business! Frustrated at a lack of concern from Prince Rupert City Council over the ongoing vandalism probelm in the downtown area, as Naripjit Sahdra has taken on what is normally a big city solution for this small town's problem.
Sahdra , the owner of the local Subway franchise on 2nd Avenue has decided that the time has come to invest close to $7,000 in security features for his downtown restaurant.
Sahdra is in the process of installing a shutter system for the frequently vandalized windows that surround his shop.
Clearly weary of the frequent attacks on his store by what appear to be troublesome youth, Sahdra outlined for Thursday's Daily News his many attempts to find some assistance from both City Hall and the local Chamber of Commerce and how he came to the decision to install the roll down shutters.
Store owner's confidence shattered after vandalism
BY CARLA WINTERSGILL
The Daily News
Thursday, July 10, 2008
Page three
One of Subway's windows is still broken. It's the ninth one that's been broken in the past year and franchise owner Naripjit Sahdra has had enough.
To deal with the escalating vandalism, he plans to install a roll-down shutter - a $7,000 expense.
"I'm doing my own thing," said Sahdra. "I don't have any other option." Sahdra is frustrated by what he sees as the lack of response from the city.
"It went to council and tried to do something, they said that they're aware of everything, but they don't do anything," said Sahdra. "I went to the Chamber of Commerce and they know what's going on but they don't do anything."
Lynne Graham said that last week in her regular e-newsletter to chamber members, she asked that they write in about their vandalism experiences, but she received no replies.
"I certainly invite anyone who is having incidents of vandalism to call and report it to us," said Graham.
Sahdra said that he went to the chamber last year to complain about the ongoing damage to his property.
"I just gave up," he said. "The cops are doing their best because they've caught the people who've smashed my windows three times. So I think that's all they can do."
Still, he would like to see an increase police presence on bikes as well as the implementation of a community patrol.
"Most of the time they catch these kids that are 14 and 15 years old. We need to educate people and the parents. What are these kids doing outside at three in the morning?" said Sahdra.
For now, he would like some acknowledgement from the city that something is being done about the vandalism. He says that he isn't the only business owner that is frustrated by the destruction and the lack of response.
"Not a single person has come here to talk to me and my windows are broken nearly every month," said Sahdra.
"Somebody should start something. We need to start somewhere, so administration needs to start by coming to ask us what we need. Nobody knows better than me what I'm going through. They need to come and find out."
Posted by . at 1:18 am

Labels: Vandalism and theft in the downtown area